A fellow student and I visited saint mary’s cathedral of limerick,also know as limericks cathedral on the 24th of October. After a good look through the site Limerick.ie  I choose to go to Saint Mary’s Cathedral as it was one of the most popular visiting sites in limerick and was also number 14 on the list of 50 things to do in limerick.
From the centre of the city where we got off the bus it was only a 10 minute walk. As it was both our first time in limerick city we use  to direct us to the cathedral 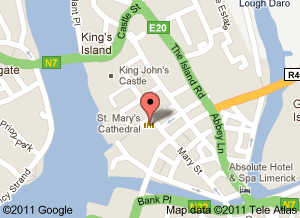 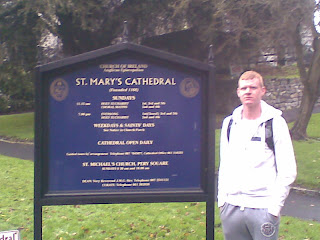 St Mary's cathedral was founded in honour of St Mary the virgin in 1168 and is the oldest building in Limerick which is in daily use.Each day there is at least one service of worship. The cathedral was built where the palace of the last king of Munster, Donal Mor O'Brien once stood.
As we entered the cathedral we approached the front desk, here we donated €3 to the maintenance and day to day keep of the building and grounds. Here we where also given a guide leaflet of the cathedral. From reading the guide we could see that their where many interesting stories about the history, below I've described the three that appealed to me most.
THE LADY CHAPEL'S ALTAR
As we walked around the piece that caught our eye straight away was 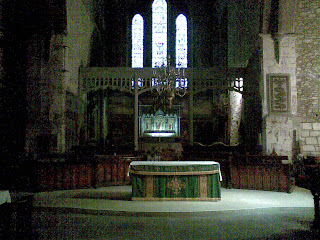 the lady chapel's altar which is made of limestone, its is over 13 feet long, weights more than 3 tons and is carved from one single limestone block. It is the cathedrals original pre-reformation high altar. On top of the altar their are five crosses carved into the stone.  It is believed to be the biggest such altar in Ireland and the U.K.
The altar was very decorative and had many interesting designs surrounding it.
THE GREAT WEST DOOR 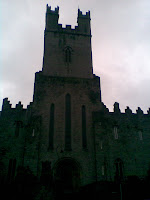 The great west door is directly below the cathedrals tower. The door is Romanesque in style and legend say that it was once the entrance of king Donal's palace. The over-head stone arch shows monster-like heads with stylised flowers. The tower which is 120 feet in height was added in the fourteenth century. I was disappointed that the view from the tower is now unavailable due to safety reasons.
BISHOP JOHN JEBB'S STATUE
I found bishop John jebb's statue to be one of the most striking in the cathedral. From reading upon Jebb i found that he was a ecumenism and peacemaker. In 1820, while Rector otthe nearby church at Abington during a time of unrest, he and his Roman catholic colleague father Costello spoke from the altar of the murroe church exhorting the people to peace. I think Jebbs statue is a very interesting historical piece of art. 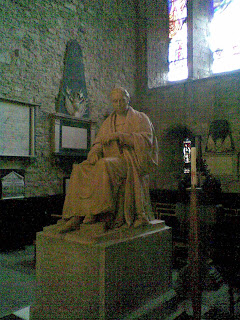 I would advise anyone to come and visit this amazing cathedral as their are many more interested stories inside that i have not covered here. If you'd like to get more information their website is very use full.
John Prendergast 11140941
Posted by Digital Media Design @ UL at 6:13 AM