Since childhood,I love to be in contact with the nature, for
this reason I frequently visited small towns, villages and
natural camp sites, and researched information about their
history.
The last small town I visited it was Ardagh in county Limerick
near Newcastlewest, home of the Ardagh Ring Fort. 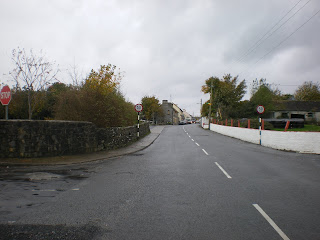 Ring fort are circular fortified settlements that were mostly built during the iron age(1000 BC-400 BC).They are fascinating places to study because there are still lots of uncertainties about where their arise from? What they were used for? 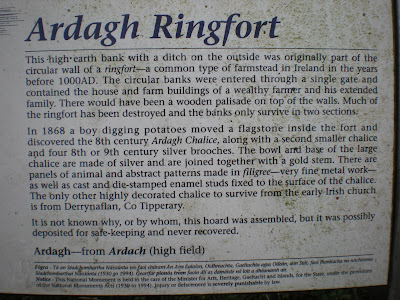 The Ardagh Ring fort was supposedly used for agriculture and defence (it is believed that ring forts did not have only one function). In 1868 a chalice, made of silver, gilt bronze, gold wire, glass and enamel, was discovered within the fort beneath a flagstone by a boy digging potatoes. The chalice was probably an investment from the fort dwellers' earnings from past seasons, and the safest place to store it was inside the ring fort.

The objects dicovered by the boy were called Ardagh Hoard, and were in fact pieces of what we now know as the Ardagh Chalice. I will soon visit the national museum of Ireland in Dublin to see the chalice and other Celtic art hand work that is on exhibition.
When i arrived to the ring fort I noted the strategic
location of the ring on the top of the hill, unfortunately the ring fort had partially
disintegrated, and I didn't expect to find wooden fences surrounding the stucture.
The external stone structure was not visible, but the internal stucture was intact
and covered with grass and whitethorn bushes,I look forward to visiting more of
these ancient forts that form of significant part of celtic heritage.
In the following video,I am risen on the internal structure where the lack of the
external structure can be observed.
This link contains detailed information about the ring forts The archaeology of early medieval Ireland.
David Moya Garcia 10003416
Posted by Digital Media Design @ UL at 1:32 PM