On Tuesday 26th of November Joe Rooney of "Father Ted" and "Killinaskully" fame played a comedy gig in The Hurlers Bar in Limerick I found out about the gig from a friend and confirmed the time and venue on this website. Tickets were available beforehand from The Hurlers but I got mine on the door for no extra charge. They were €5 which I thought was very reasonable considering how well known Rooney is.
My friend and I arrived through the wind and rain about five minutes before the advertised 8pm start but we were dissapointed to see that there was very few people in there. However, it turned out that the doors were opening at half past and all was well.
We settled down in good seats and bought ourselves drinks which were priced a little bit above average (Guiness €4, Bulmers €5!)
The crowd started to filter in and by the time the first act took the stage there was around 60/70 people there.
Our host for the night was Finbarr and I thought he was brilliant. Throughout the night he had some hilarious jokes between acts which made the transition from one comedian to the next very enjoyable. He gamely took the mickey out of several members of the audience and I quickly learned that would be a trend for the night!
Our first act was local comedian Ben Buckley. He had the tough job of opening the show and joking with a completely sober audience. I liked him and although some of his jokes didn't land as well as he might have wished he recovered well and got a good clap when he finished.
The next act was Mick Perell (unsure about spelling!) Finbarr described him as "the father we wish we had" and I can see where he got that analogy! Mick was a hit or miss guy because he had some very risky jokes but I think the majority of the audience, me included, enjoyed his bluntness! Our final act of the first half was an American comedian that I thoroughly enjoyed. I forgot to note his name mainly because I was laughing the whole time he was on stage. He was basically a genuinely funny man and got a massive round of applause when he departed.
The second half opened with Irish comedian Tom O'Mahony. He was hilarious and had the crowd in raptures pretty much for the entirety of his set. Then Derek Nolan (from The Hurlers, who actually organised the whole night) took the stage as the final act before Mr. Rooney. He was good and got a great clap.
Finally Joe Rooney took the stage at around 11pm. Before he took the stage I must admit i was apprehensive as to whether he would be a complete anti climax as I'd enjoyed the previous comedians so much but he definitely didnt fail to impress. He even sang a few songs and did some great imitations of Bono and Nelson Mandela. He interracted with the audience very well, in particular a girl up front who had drank a little too much and interrupted him to shout "Badger!". He referred to her as Ms. Badger from then on and I'm sure a nickname for life was born then and there. When the time came for him to finish he got the biggest applause of the night and in my opinion, he thoroughly deserved it. 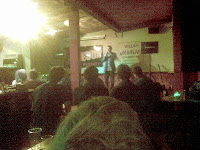