Fireworks at the Castle! 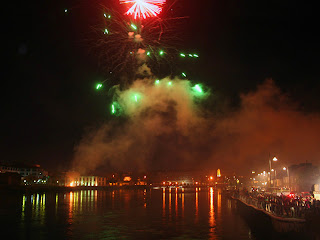 At http://www.limerickcoordination.ie/, the Limerick Coordination Office provides a one-stop-shop for finding out about any official events taking place in Limerick. Apparently, we’re the European City of Sport, in 2011, and to commemorate this, ”the City will be putting on a fireworks display which will light up the skies over the majestic Treaty City following the International Rules on Saturday evening.”
Odd that they picked a made-up sport that only two countries even know exists to kick things off.

I’d gone to the Skyfest in March which, to my surprise, was a lot of fun. Could lightning strike twice? Not literally, obviously. Fireworks and lightning don’t mix. Unless you’re making an episode of Jackass.

Now, while it was always going to be on a smaller scale than the National Lottery sponsored Skyfest, there wasn’t a great turnout. Anytime that less people turn up than expected, I’m reminded of the movie Spinal Tap, and the manager’s response to the fact that his band had become less popular, saying “I just think that their appeal is becoming more selective.“ So, there I was, at an unfortunately exclusive event. There were even bouncers, dressed as police. Joking aside, it was clear that the audience was mainly kids, with parents. Because of such a visible police presence, the crowd was relaxed. When the fireworks display began, this changed to giddy, noisy excitement. Even the gaps between each round of fireworks were filled with squeals and raucous laughter. Personally, I think the police should have had more decorum.

Even though I have seen the amazing Sydney Harbour Bridge fireworks on TV, I had a good time. The rain stayed away, and everyone seemed to enjoy the event.

I look forward to other events that will celebrate our status as European City of Sport, hoping that next time they pick an actual sport to celebrate it with. International Rules, for goodness sake! It’ll be International Jenga next.