Thomond Park - Past and Present

Way back in October 2006, when I was in first year of secondary school, our science teacher decided to take us to see Munster vs. Edinburgh at Thomond park. This was before the redevelopment of the stadium, when the majority of people had to stand. I remember it being a very tense match and when the final whistle blew and Munster had won, everyone invaded the pitch to get autographs from the players such as Peter Stringer and Ronan O'Gara.

This is my only recollection of the old Thomond park before it was redeveloped as the standards of Irish rugby increasing. The redevelopment of the Park cost a significant amount of money, somewhere in the region of €40million. 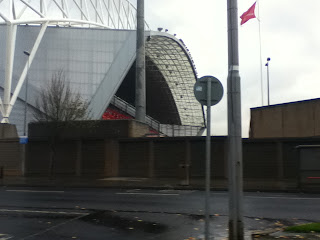 Since the redevelopment there have been concerts held at Thomond Park, with the most noticable one being Elton John. Many fans braved the weather to turn up to Thomond Park to watch Elton John deliver a fantastic musical performance. Since then, Rod Stewart has also performed at Thomond Park.


Also, during the building of the Aviva Stadium in Dublin, the Irish national soccer team played a match against Australia in Thomond Park. We were on the wrong end of a 3-0 scoreline that day so maybe Thomond Park is only lucky for rugby!