After browsing the web for places of interest in Limerick I came across a website suggesting things to do whilst in Limerick.
With my deadline fast approaching and little else to do, I made my way into the city in hopes of finding the People's Park. Having never ventured further than the main streets I was surprised to find it was only around the corner of O' Connell Street and Colbert Station.


With my lack of ability to self-navigate in an unfamiliar town to an unfamiliar destination, I used the trustworthy Google Maps application on my android and arrived at the entrance within minutes. 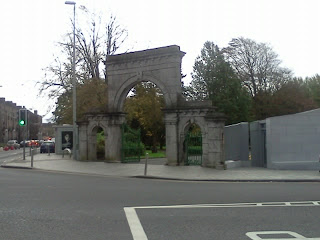 Just inside the entrance there was a guide (below) listing the various monuments located within the park. It also gave a brief timeline of the park's history. 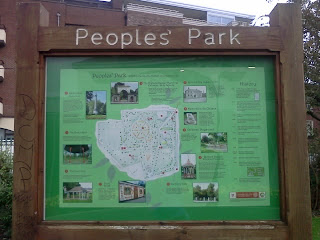 I found out that it had originally been a private park from the 1830's through to the 20th of August 1877 when it was officially declared a public amenity.
It was the first park in the ROI to receive a Green Flag award, and in 2003 it won an award for the Best Local Park. 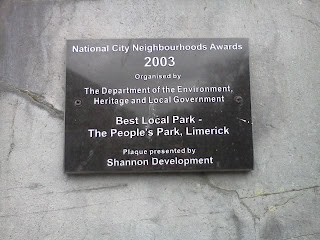 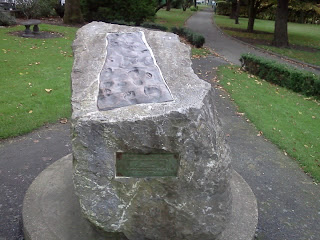 One such monument is the Children's Memorial (pictured right)
to condole bereaved parents. Another is the Richard Russell Fountain erected in 1877, which commemorates Russell as he was a highly regarded employer. (right)


The park has a large green area where one would presumably play ball games leaving me bemused when I noticed a sign indicating no ball games are allowed to be played in the park.

To my delight there was a playground, as I had previously spent many hours hoping to find one. Although intended for young children I couldn't pass up the opportunity to use the swings and embrace my youth. 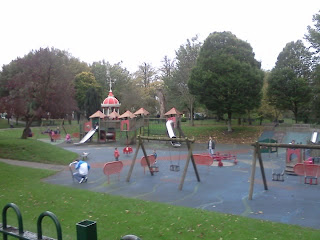 I can envisage myself visiting this place many times in the future to relax in the tranquil environment.

Related Links
31st thing to do while in Limerick.
http://www.limerickcity.ie/OurServices/Environment/ParksandOpenSpaces/PeoplesPark/