I decided to do the Richard Harris statue for this project as it is one of the first things I remember seeing when I visited Limerick City for the first time. It is located right in the centre of the main Limerick City shopping area just off O'Connell Street on Bedford Row. 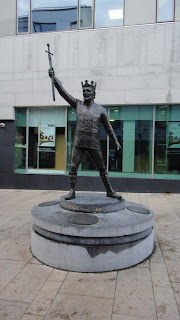 The statue commemorates Richard Harris who was born in Limerick. It depicts him in one of his most famous roles as King Arthur in the movie Camelot.

While researching the statue I discovered there is a lot of controversy surrounding it. Many people believe it is not a decent enough representation of Harris, saying it doesn't look anything like him. Others say that the sculptor should have chosen a better role of Harris's for the statue. There are also a number of people that think the statue is a joke and should be removed. There is even a campaign on facebook to have the statue removed:
http://ga-ie.facebook.com/pages/Campaign-to-remove-Richard-Harris-statue-from-Limerick-City/122816664443486

A reporter for the Limerick Leader wrote an article that includes most of the main problems people have with the statue.
http://www.limerickleader.ie/news/local/harris_cast_touristy_kitsch_says_artist_1_2182357

The statue has four plaques on the base which give information on some of his movies and a biography of the actor. 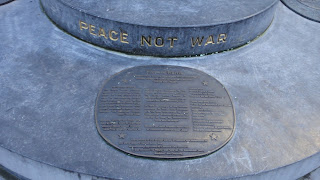 The first time I saw the statue I didn't realise it was meant to be Richard Harris because (as a lot of bloggers and journalists have said) it doesn't look much like him, then I read the plaques and realised who it was. I have only ever seen him as Professor Dumbledore in the first two Harry Potter movies but i've heard a lot about his acting skills in other movies such as The Field.

In general the Limerick population is very proud of their famous actor but don't feel as if this statue does him proud. Some however feel that the statue is a form of entertainment on drunken nights out, if Richard Harris was still around he probably would have found this funny:
http://www.flickr.com/photos/lette_applejuice/2452351064/