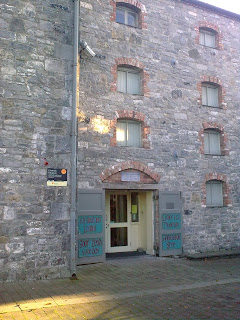 The Limerick Museum, also known as the Jim Kemmy Municipal Museum, is a small museum tucked neatly away near the main entrance of King John's Castle, and has been in its current location since 1998. Its official address is 'Castle Lane, Nicolas Street, Limerick'. Being a native of Co. Limerick, I was not even aware of the existence of this little museum, and surveying friends and family, I found that they had not heard of it either! Perhaps this is largely due to the fact that it is strongly overshadowed by the extremely popular and impressive 'Hunt Museum' on Ruthland Street.
The museum is run by the Limerick City Council, and I learned of its existence online on the Limerick City Council website, which pointed out the location, admission price (it's free!), and opening times of the museum. The museum is evidently named in memory of Limerick politician Jim Kemmy, who the Kemmy Business School in UL is also named after. I embarked on a visit into the centre of Limerick City on a beautiful Tuesday afternoon, the 25th of October in order to visit this curious museum that nobody seemed to have heard about.... 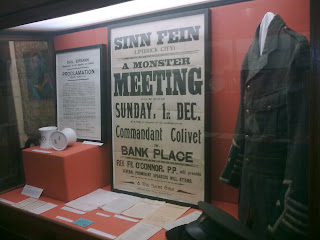 The museum was completely empty apart from 2 desk clerks inside the door, who were in deep conversation regarding the presidential debate which was on television the previous night. The emptiness in the single-roomed museum made me consider for a moment whether I was even allowed to be there! It was not long before I realised that museum was a true dark horse, a vastly under-rated museum which did not remotely get the credit it deserved. There I found a treasure trove of historical items, documents, photos, paintings, and maps related to Co. Limerick. 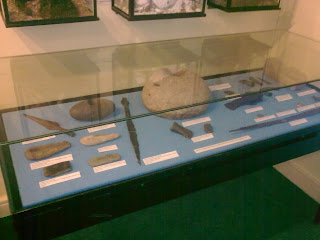 There were many thought provoking artefacts from key points in history, including the 1798 and 1916 rebellions, and the world wars, which included uniforms, weaponry, tools and documents. There were also a vast collection of archaeological findings from the Limerick area, dating back as far as the Bronze Age, and there was also a very comprehensive collection of money dating back centuries. I promptly began to wonder why nobody knew about this quiet little gem of a museum. 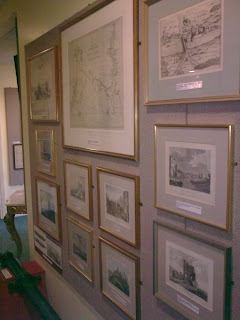 On the walls there were maps and pictures giving a strangely vivid insight into what areas in Limerick were like in the past.

It was one of those wonderful moments of pleasant surprise to discover such an interesting and embracing collection in a city which I thought I had done everything there is to do in, but thanks to an internet website, I found someplace new and very rewarding. I would highly recommend this museum to anyone who is passing close-by.

Below is a Google Map showing the museum and its location: