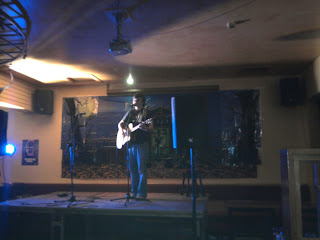 I attended ULs got talent on Tuesday last, the 26th of October in the Stables club. Heading there at around 9:30 that evening, I half expected to see a lifeless bar with a couple of people performing in the corner. However, on arrival I was surprised to see a large stage at the head of the club, a big crowd of people and a great area with a desk for the three judges! It was a lot more than what I had first expected. Still surprised at what I saw, I headed to the front for a good view. The event seemed to grab peoples attention as the first thing I heard upon entering was the presenters voice through a booming microphone, which overshadowed any noise the crowd was making. There was only about five acts performing during the event, but what a variety it was! The acts ranged from singers to tap dancers and even to a transsexual comedy duo! As the night progressed, the crowd got more and more into it and the great atmosphere continued to grow throughout the night.
I thought the event was professionally organised. Before each act there was an introductory video shown on the TV screens. I thought this was a very good idea and it added to the professionalism of the event. After each act, the attention was drawn to the three judges who gave critisism (mostly positive) to the performers.

The acts I found most unique and enjoyable were Matt the tap dancer and 'Lady and Transfusion', the duo I mentioned earlier! Matt's tap dancing abilities were truly incredible (apart from his near fall off the stage!). He received very positive comments from the judges and also managed to make his way into the finals!

'Lady and Transfusion' were just mad, but very enjoyable! Basically, a man dressed as a woman and a woman dressed as a man, performing various humorous compositions! Certainly one of the highlights of the night, especially when the woman's (man's?) pants fell down! Overall, a professional and most enjoyable event!

This group provided a link to the official ULs got talent website, where I found all the info I needed before attending!-http://ulsgottalent.webs.com/