I recently went to see Fight Like Apes, a Dublin based band, play in Cruises Street in Limerick city centre as part of the Limerick Live event organised by HMV, Limerick City Council and Dolan's pub. The event took place on Saturday 2nd of October.
There was a stage set up in the middle of the street where all of the bands performed. There was a smaller stage also set up at the top of the street where various dance and comedy acts performed throughout the day, providing some extra entertainment in addition to
the fantastic bands playing on the main stage. 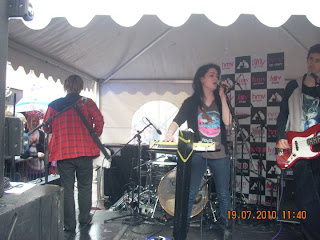 I was initially informed about the Limerick Live event after being invited to attend it on Facebook. I am a friend of Dolan's Pub and they set up a Facebook event detailing the day and inviting everyone to come along. Upon hearing that one of my favorite bands,
Fight Like Apes (Affectionately called FLApes) would be playing I decided it would definitely be worth heading into town for. I went with three friends of mine who are also fans of the band. We went in early so that we could catch some of the bands on before FLA.
We caught the entire High Kings set which was surprisingly good and entertaining. During the interval we managed to get right up to the front, a position we maintained right through the Fight Like Apes set.

Seconds before Fight Like Apes were due to come on stage the rain started but luckily it never became more than light drizzle and it did nothing to water down the amazing atmosphere of the day. By this stage the crowd was rearing to go and pumped up. It was clearly made
up of mostly devoted fans hoping for a good show. We were not disappointed. Fight Like Apes stormed on-stage and almost immediately launched into their music. Their stage presence was fantastic and very energetic. They played mainly songs from their new album but also
got a few fan favorites into the set. Unfortunately they didnt play too many songs as they were playing in Dolan's Pub again that evening. 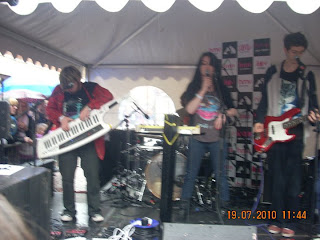 All in all it was a great day out with some brilliant entertainment on offer in Limerick City centre. I eagerly await the next such event.