There I am, sitting in my room starting to study for a test the following morning. It was a Monday. I'm listening to some Maybeshewill, a (for the most part) instrumental, post-rock band from Leicester, England. So, I get to thinking (a first for this particular study session); 'Maybeshewill did an Irish tour there about a year ago, which I missed. I wonder if they're coming back any time soon.' Grateful for the break in 'study', I start Googling (if that's a word) and, sure enough, they were playing in Baker's Place in 2 days time. Job! 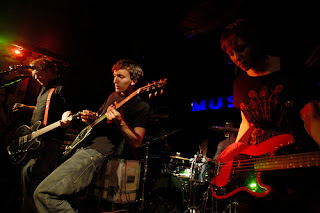 So, It's Wednesday 20th October. After a few sneaky beers at home, I arrive at Bakers at, I'd say, half past ten. There's a good enough crowd there already. I don't know if it was a particularly busy, quiet or average night. Being Corkonian diaspora, This was my first time being in Baker's Place. I missed the first act whose name escapes me but caught the second half of the next band, 'A Plastic Rose' from Belfast. They seemed to be some sort of nu-wave, electronic, pop-rock (I've never been good with genres and sub-genres). Handy all-in-all.

At about quarter past eleven, the main act, Maybeshewill, took to the stage. Their set was just over an hour long and was, in a word...Awesome!!! Their style is a mixture of heavy, distorted guitars and slow, melodic breakdowns. They could be compared to bands like 'And So I Watch You From Afar' and 'sleepmakeswaves'. They played most of their material incluing the majority of their latest album 'Sing the Word Hope in Four-Part Harmony' plus several favourites from their previous album 'Not for Want of Trying'. The atmosphere was electric and the performance was flawless. The highlight of the set was probably the title track from 'Not for want of trying' which features a great monologue from !976 film 'Network'.

The gig was great. Excellent crowd, Excellent venue, Excellent crowd! I will definitely keep an eye out any future 'Maybeshewill' gigs happening in Limerick or Cork. I urge everyone to listen to this band...