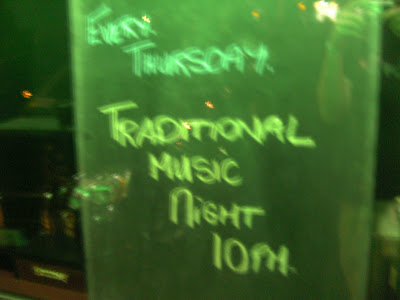 For my individual assignment I decided to attend a local traditional music session in a bar in my locality. This session is a weekly occurrence and is highly popular with the locals of Patrickswell.

The “Trad night” is advertised on a blackboard beside the entrance to the pub however on researching online I found a site which promotes traditional music nights all over the country as well as in countries such as America. The night however endorsed on this website is wrong as it is usually held on a Thursday night, not a Wednesday. 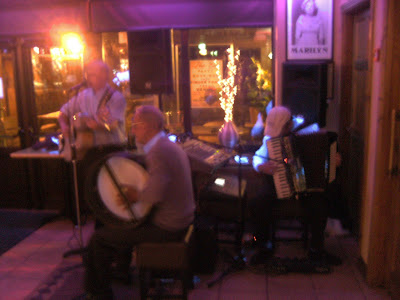 I have attended this traditional music session on a number of occasions and have found it to be a night full of the “craic agus ceoil”, although I had never fully appreciated the talent of the musicians and the atmosphere which was created in the pub from the very first squeeze of the accordion. All the musicians are local people and are very popular in the community of Patrickswell. I thoroughly enjoyed this musical display as it showed the closeness of the community as they are joined together by the beauty of Irish culture and heritage through the splendour of traditional Irish music.

The musicians play colloquial Irish music which is instilled in our heritage and culture. Songs such as “An Bothar Bui”, “The Black Velvet Band”, “The Dawning of the Day” and “Oh Danny Boy” are all popular songs with the musicians as well as the locals. The musicians names are Seamas Sheedy on the accordion, Pat Moloney on Bodhran and Mike Tuohy on guitar and vocals. This musical display is not only confined to the performers but is also vigorously partaken in by the people who are there enjoying the music. This is seen throughout the recital by the eruptions of chorused verses from various corners of the room as their favourite irish songs are sung and played at energetic lengths.

Many other events are held in this pub, such as the benefit night for a local woman on Friday the 15th of October. Details on events in the community I found on the Patrickswell blog. Also posted on this page is local news, such as the Tidy Towns events as well as GAA Golf society updates.