A small forest of guitars. 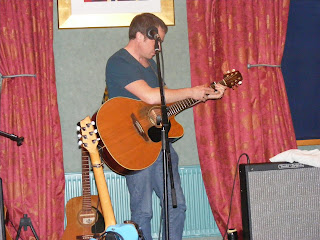 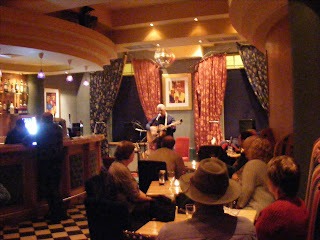 On a recent visit to The Locke Bar & Oyster House on Georges Quay, I noticed a poster for their Songwriters' Night. My interest piqued, I filed the information away for future reference. Unfortunately, on a return visit in early October, I was told that the songwriters had moved on to places unknown.

Thankfully, a quick check of The Limerick Post's online Event Guide showed that the songwriters had moved venue to Bentley's on O'Connell Street, and their inaugural night was to be on Thursday, October 28th.

So I gathered my notebook and camera and went in search of songwriters. The show starts at 9pm in the upstairs bar and follows the usual "open mic" format. Performers can add their names to the sign-up sheet and they get to play three songs in a pretty much in "first-come, first-served" order. The only exception is a special guest artist who plays a slightly longer set.

On the night I visited, the guest was Pete Courtney from Cavan, playing a refreshing indie rock/folk mixture. In addition to the ubiquitous songwriter's acoustic guitar, Pete was unafraid to also use the textures of distorted electric guitar, a beatbox and a looper. The technology never got in the way of some clever songs which brought to mind latter day Radiohead.

And boy were there guitars… Big ones, small ones, Martins, Takemines, the guitar stands resembled a small forest. An in-tune upright piano stood unplayed by the side of the stage. And here lies the problem with open mics in general and songwriter nights in particular: I always approach them with some caution because they have the potential to drag everyone concerned down to the lowest common denominator.

A badly curated songwriter night can make you run screaming for the nearest karaoke bar just to hear something different. At worst, it can end up a sinkhole for all that is cliché, self indulgent and dull. The presence of numerous identical looking guitars gives rise to fears that the music will all come from the same cookie cutter.

This was not the case at Bentley's. The performers and audience were a striking mix of ages, backgrounds and musical tastes (though I must admit the age group did skew a little towards the over 30s). Josh from Oregon was probably in his late fifties, and he played his country-tinged folk songs with great conviction. His voice resembled a mixture of Randy Newman and Richard Thompson.

Similarly, Debra Wallace from Ennis came up and sung with a voice that recalls Sinead O'Connor and Polly Jean Harvey. Everybody there had an individual voice, from tightly written story-songs to sprawling one-chord grooves.

The Songwriters' Night has been going for over a year since its origins at The Locke, and it is a credit to all involved that the standard is so high. Such things often do not last long. There's no real money in it and participants do it for the sake of their art. It takes a little dedication to brave a winter's night and subject your latest masterpiece to the scrutiny of your peers. There's always room for new blood, and who knows, maybe their next special guest will come from UL?...