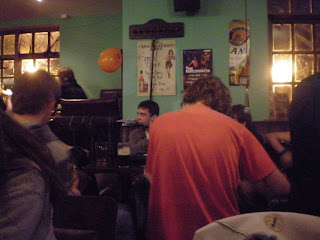 During my time in Limerick and in Ireland, I have tried to see as many music events that I am able to. As I am a big music fan, and find the music here very good and different from back in the states. I came across this traditional music at scholars pub through a facebook page http://www.facebook.com/?ref=logo#!/AIFSAbroad

Like everything I have come to find out if it I Ireland if it says it is going to start at 9 it means it will most likely start at 930. But being American and I hate being late, we got there at 9. By 930 the music was on its way, and it was very good. I have heard traditional Irish m 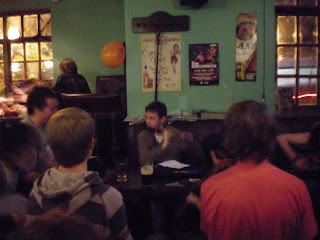 usic before but only on the radio or on the computer. So to see it in person was amazing. I guess you could say it looked like there was just a bunch of people who wanted to jam out and play some good music. And as the night went on it seemed as though there was more and more people that ended up coming and playing. At first I thought these people who kept coming just knew the people playing already, but they brought out their instruments and started to play. Even one guy asked us if we wanted to play his guitar, I have no guitar background, I told him if someone gave me a violin I would be set and would at least try, but no one was willing. And I was having a good time just watching everyone play. This type of thing never happens back in the states, and I loved it. If there is going to be a band or group of people playing at a bar or anywhere for that matter it is way more formal, with the whole set up, and I want to say you wouldn’t get people just coming to play music like that. I love how in Ireland everyone knows there traditional Irish music, and is in t 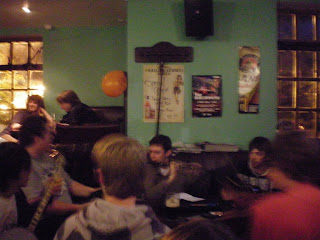 ouch with their musical side.