On the night of Tuesday 26th of October, around 9pm, the monotonous noises of rain and traffic around the Hurler’s Pub in Castletroy began to be broken by the sounds of raucous laughter coming from inside the backroom of the public house. The second ever comedy night in the Hurler’s Bar had commenced!

I found out about this event through http://www.facebook.com/event.php?eid=157445677621992. The venue was very local to me, and the tickets to see the man who played Father Damo in Father Ted, and Timmy in Killinascully, at only €5, seemed a bargain price for an unmissable opportunity!

I arrived at Hurlers around 8:30 after meeting some friends, and we bought our tickets at the door. We headed in to find a warm and welcoming space, not too crowded, with a great atmosphere and everyone ready for a great night! 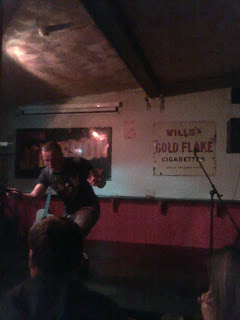 After securing a table for the night, and ordering our drinks, the room had filled up with about 70 people, and the MC for the night, Finbarr Coveney, took the stage and got the night off to a flying start! He was really excellent and introduced every act before they came on, and cracked some great jokes, which made the transition between acts very enjoyable! 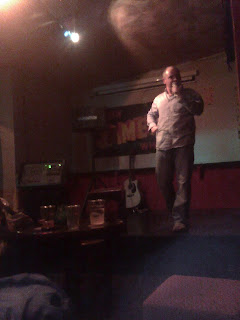 The first comedian to hit the stage was Ben Buckley, a local comedian! He had the tough job of opening the show to a still sober audience, and some of his jokes were less than hilarious, but he got a good round of applause as he finished. Next up was VERY local comedian Mick Peril, who I’m very sure was hilarious, but personally, I could not understand a word he was saying in his thick and deeply embedded Limerick accent! The jokes I did understand went down a treat though, and he wasn’t afraid to pull out the more offensive jokes, which will always get mixed reactions, but will also never fail to please good sense of humour! 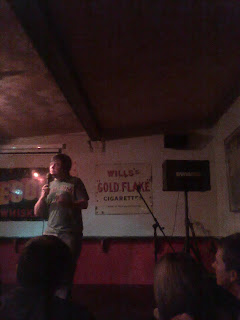 There was then a 20 minute break as everyone topped up their beverages, and the next act to hit the stage was American comedian Billy Anderson.

He was brilliantly funny! Period!

The penultimate act was Derek Nolan, manager of the Hurler’s. He had some very, very funny jokes! He was more than a little nervous, but the crowd were not as sober as earlier, so a perfect balance was achieved! 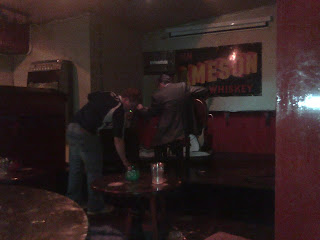 And finally was the legend that is Joe Rooney! He began with his imitation of David Bowie singing a lullaby, followed by an off-the-cuff Bono impersonation! I didn't get any pictures of him during his act as I was laughing so hard, but he was quite simply fantastic! His banter with members of the audience added to his brilliance, and his set lasted for over an hour and didn’t waver at any point!

The night was a great success, and for only €5, well worth it! I will definitely be going to comedy gigs there in the future!