"OKTÖBERFEST" in the “Scholars bar” in University of limerick. 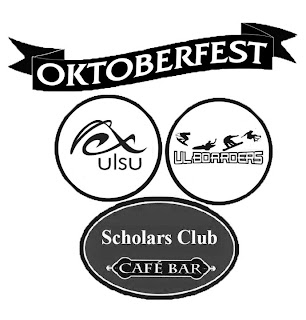 I attended this event on the 14th of October in the Scholars bar at 7 o clock in the evening. The event was organized by the UL Student Union and the Boarders Club. I found out about this event through the website "Facebook". The url of this event is: http://www.facebook.com/event.php?eid=137915776254890&ref=share . 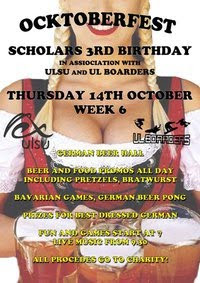 The event was to raise money for charity. It started off being very quiet as it was very early in the day as many were only finishing college at that time. However as time went on the quantity of people started to rise. There were many games and activities at the event such as “beer pong” and many other drinking games. The hosts of the event dressed up in traditional German clothes.

To raise money the UL boarders club sold pint glasses with their logo stickered on the front. The glasses were cheap at only €4 a glass. As well as this once you owned a glass you were entitled to fill your glass for only €3. This seemed to be a great success. The game beer pong ,which was very new for me, is where 6 plastic beer cups are set up at either end of a table in a triangular pattern. Each cup contains a small portion of beer. Each person is given 3 ping-pong balls each and the object of the game was to bounce the ball into the opposing persons cup. If a ball lands in the cup then that person has to drink the portion of drink. It keeps going until one person has no drink left which means the other person wins. Other games included driving a nail into a log of wood with a hammer and sliding a pint of beer across a table without spilling it. The night seemed to have a great turnout and a huge success. I very much enjoyed the night and made many new friends. I’d definitely recommend going to this event if it was organized again next year.