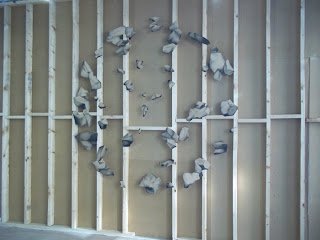 The event that I visited was in the Occupy Space Exhibition/Installation gallery located on Thomas Street, next Bella Italia in Limerick city center. It has been set up to facilitate an ever expanding need for artistic exhibition spaces in Limerick. It is an artist led project, run by
members of Wickham Street Studios on a voluntary basis. Occupy Space delivers a relentlessly energetic programme of exhibitions and events.

This event was named Three Solo Shows/Exhibitions, by three separate artists which were all held in the one space. The three artists were Ramon Kassum, Laura McMorrow and Mark O Kelly. I first learned about the Occupy Space exhibit from a friend on Facebook. It appeared in my timeline that he was attending this event and I immediately checked the page out. I realised that the exhibition was premiering the following night and decided to attend. I checked the attending box and decided that it was a good event for my project. I then went on google maps to try and find the easiest way to navigate to the venue! On the page there was also links to the Occupy Space website which gave a large amount of detail about what th
ey do at Occupy Space and about the upcoming exhibition. They also linked to a large amount of previous photos of paintings that were previously at the gallery on the website Scribd.

On arrival at the venue(after navigating the city's one way streets and occasional dodgy character) I was greeted with the front window of Occupy Space which was a interesting frosted effect bed etched on the display: 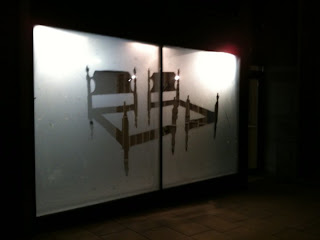 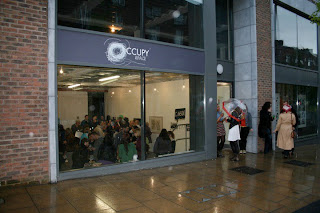 The attendance for the opening night was quite low whilst I was there. I stayed for about an hour taking photos and observing other peoples reactions to the installations. On the website the description of Laura McMorrow's work is as follows:

"These works often find their starting points in acquired images, which the artist then filters in order to remove selected content. The resulting works are quietly subversive, delicately painted contexts, suggesting fragmented narratives."

I believe from looking at other facebook photos that as the night and indeed nights went on, attendance improved for the exhibit: 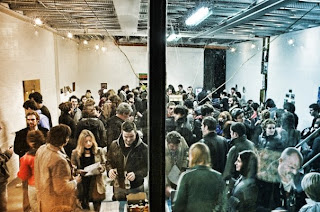 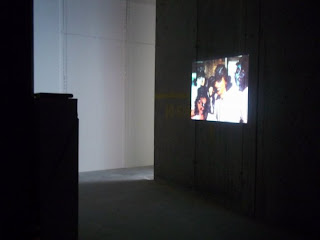 Their program involves hosting exhibitions of emerging and established artists,
with a strong emphasis on exhibiting those based in Limerick. Occupy Space will also host other art
ist led projects such as artists talks, seminars and collaborative events with other creative practitioners and organizations. The event was quite interesting and the pieces on display were very interesting especially the pieces related to digital media such as the painting displayed on the television set and the projector room. All in all I had a positive experience researching and locating this installation. It is positive to see a strong vibrant artistic and creative scene thriving in Limerick, where ideas and creativity are allowed to flourish and prosper. Occupy Space hopes to host many more of these exhibitions in the near future. If you are interested in taking part in these future projects please email one of the following: 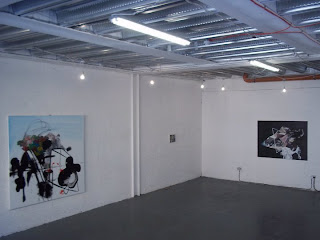 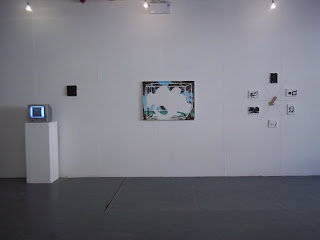 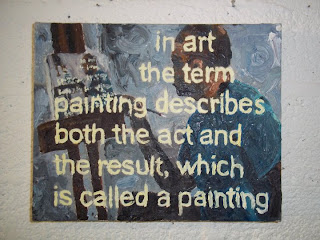