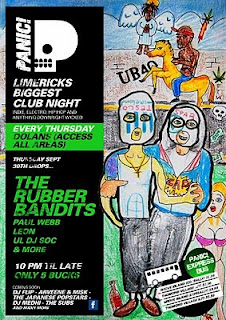 On the 30th September 2010, I attended Panic! in Dolan’s Warehouse on . Panic! is advertised as Limericks biggest club night with an admission fee at an extremely reasonable €5 considering the quality of the live acts that play there.

The line-up on this night was the of , , Paul Webb and the headline act, The Rubberbandits, a comedic rap duo that I only became aware of since moving to earlier in the month. I instantly became a fan finding their songs and material very comical.

I arrived at the venue just before 10pm to discover a vast queue of people waiting to get inside, understandably with this being a homecoming gig for the Rubberbandits. Although it was incredibly windy and a drizzle threatened to break into a heavy shower at any moment, I decided to wait it out and see I could make it inside before it sold out. Thankfully the queue moved speedily and I made it inside.

When inside, I went upstairs where the resident DJ was playing mostly alternative and indie music which was a welcome break from the usual music a person would hear in a club this time of the night.

The first support act to take the stage were Campaign LK, in which I overheard were playing their debut gig. Their sound resembled that of Rage Against The Machine and they were very solid considering this was their first show.

At around 12am, The Rubberbandits took to the stage to a rapturous reception from their home crowd. They played for around 60 minutes with a set list including "Bag of Glue", "Antheny's Eye", and "The Ra" – each song met with a mass singalong and crowd surfing.

It was a fantastic night in an amazing venue for music. Dolan’s Warehouse is perfect for an event such as this due to its intimacy and the quality in their sound system.