An event I found to be of great interest to me was the Lough Gur Story telling festival. Lough Gur is a beautiful location with many historical features and, in my opinion, was the perfect place to hold such an event. The Lough Gur Annual Storytelling Festival was introduced to commemorate the memory of Tom McNamara, a seanchai of renown and who transformed storytelling into an art form. The festival commenced on Friday the 22th of October and finished on Monday the 25th inclusive. The line up that was prepared for the festival was quite impressive, it included: Sean Keane, Karl Spain along with Miriam Lambert, of the incredible Lambert family fame, Galway Circus with their Sorceas Beag performance and an enviable line up for the Saturday night to include the winner of the National Schools story telling festival, Mike Glynn as MC for the night, introducing Little John Nee, Con Fada O'Drisceoil and Orla Harrington dancer and violinist.

I decided to go to the festival on the Friday night to see Sean Keane preform in the Honey Fitz. Sean Keane is a fantastic irish musician and was described as the “greatest musical find of the 90’s” by “The London Independent”. He preforms traditional Irish, folk and even country and blues songs. All these lend themselves to his unique style and unforgettable voice. Tickets to see him were €20 each but it was well worth it. 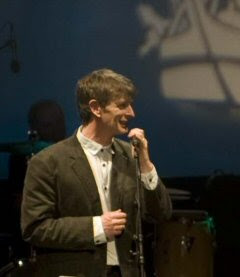 I went to the event with my father, who is big into the traditional irish scene and irish culture, especially the musical side. My father is in his own band called Keltic Kats, they play traditional irish music and he is a great fan of Sean Keane. Also he has recently created his own website, which is called IrishClanWorldwide, trying to promote irish culture, music, story-telling and lots more. Its very interesting. This made the Lough Gur Story telling festival the perfect event to attend.

We arrived at 7p.m. and there was a huge crowd already there. He started at approximately 8p.m. and from the moment he started he was brilliant. “He was a true example of an irish musician”, those were the words from my father. He sang many great songs but he sang one that was truly amazing called “Exile”, which was written by Kieran Wade but was off Sean’s album called “The Irish Scattering”. Its a great song about leaving a loved and being taken away by the army. He sang it also on Geantraí which is a program on TG4, heres a link to it just to show how good he is and also how good the song is: Sean Keane - Exile.

Overall the night was very good, the music was quite enjoyable and the atmosphere of the whole place was one that I’ve never witnessed before. It made me feel like I was back in the old days of irish culture and it really was incredible.