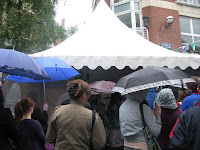 I went to Limerick Live. It was held in Cruises Street in Limerick City. It started around three o’ clock and ended late at night at Dolans Warehouse. There were many different bands performing on Cruises Street during the day. It was on, on the second of October. At the beginning of the show, it was fairly crowded. But as the weather began to turn worse, the crowd had started to disappear, and it was only 3.30! Though the rain was only a light drizzle, the crowd lightened, but not to the extent that the bands effort became pitiful. The bands were enjoyed over all. There were also homemade sugary snack stalls etc. available to be bought and eaten too. There were also Improv Workshops going ahead. These took input from the audience and used it in their acts. This was lead by Miles Breen, a local celebrity in the art of Drama and our very own Drama Improv coach here in UL. There were many enthusiastic participants in the audience, but as a whole, most of them felt the embarrassment from having to yell out in the middle of the street.

Behind this project were Dolans Warehouse, HMV, Limerick City Council and Limericks Live 95fm. The idea behind the event was to bring positive attention back to Limerick City. Recently the view of Limerick has begun to become more positive, and this event was meant to highlight that. Though the weather wasn’t a great addition to the event, it took off none the less. The streets were full of music during the day, with bands such as Flight Like Apes, The High Kings, John Spillane, O Emperor, We should be Dead, and Supermodel Twins were all playing on the stage outside Hickeys fabric shop.

The day’s event ended around five to five thirty in the afternoon, but soon after the party continued in Dolans Warehouse. The bands were playing again and the atmosphere was electric.