I first heard of Dolans when deciding about going to limerick. Past students of Limerick University that I had spoken to, highly recommended Dolans as a venue that supports many of the great events that limerick has to offer. I found many internet sites about Dolans but found their own site as well as their ‘my space’ page to be the very useful. http://www.dolanspub.com/warehouse.html
Then when the music society said they were going to Dolans for a gig I had to go and see what the hype was about.
http://www.myspace.com/dolanspub 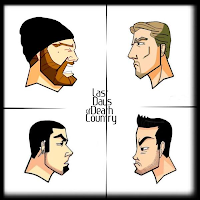 When we got to Dolans at about 9 to see Last Days Of Death Country I was hugely impressed by the venue even though it only being a smaller gig upstairs rather than in the ware house, it seems so traditional from the outside but once you get inside it is apparent what the hype is about. Unfortunately I don’t have a camera so couldn’t take any pictures of the night. It was great to see a band that has supported large acts like Bob Dylan for free which in my book is always a winner. Last Days Of Death Country were supported by a number of acts with a different music style in each band creating a great contrast of music, so there was something for everyone to enjoy.

Last days of death Country didn’t start until about quarter to 11 so we had plenty of time to have a few pints and relax listening to the supporting acts. The music society had arranged a free pint which was happily welcomed and got everyone into good spirits about the gig. When the main act started there was quite a good crowd gathered to listen to them and it was very lively, adding to the atmosphere in Dolans, the option to stay up the front to listen to music or move back into the smoking area for a chat with friends was really good and you could still hear the band perfectly.

The gig was also followed by a DJ after the bands to make sure that the night didn’t finish too early. The DJ played some great music and seemed to have an idea for what everyone would like. In future I will be visiting Dolans a lot more often and highly recommend it to anyone thinking about going there. The link below is of Last Days Of Death country playing an acoustic set in Dolans.