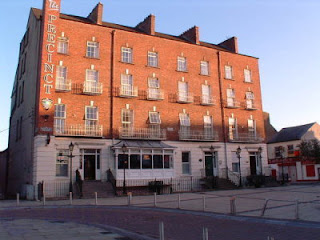 BAKERS'S PLACE
The event I will be writing about for the purpose of this assignment is on the Jam Jam Session that took place on Thursday 28th October in Baker's Place, Tait's Square. I found out about the gig through http://www.google.ie/, I then proceeded to http://www.listings.independent.ie/. The gig started after nine and it was free admission (Thankfully).

After arriving at the pub I settled in for a quiet pint and looking forward to a nice relaxing night of easy going music as it said jam session. Unfortunately I was in for a surprise as it was a gig of all types of genres being represented. The amps were plugged in and turned up!!

There were a few fresh bands up first playing only two to three songs each. Most of which would be enjoyable but alas one band were heavily drunk when they arrived on stage.
It is only when we arrived to the serius bands like "S 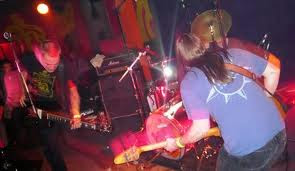 ilent Front"(pictured below)
"Silent Front" are a Brittish band who are currently on tour. The band played thier own punk songs and also played a few crowd requests to please crowd.
The band that followed "Silent Front" were just as impressive as they mixed metal with pop songs like Poker Face by Lady Gaga.
The gig came to close at half eleven or so. It was a good gig when the real bands came out. All in all Baker's Place is a great venue for gigs and the athmosphere is always warm and friendly I would advise everyone to see a gig up there.
Shane Harty (MMPT)
10123873