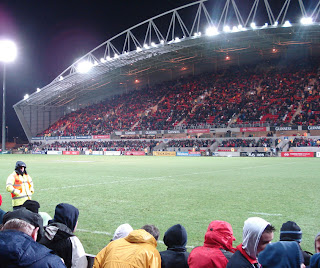 It’s well known that Limerick is the rugby capital of Ireland and has a proud history associtated with the sport. Limerick is the home of Munster rugby which is more of a religion to the local people than a sport, you cannot walk down the street in limerick without seeing the red or the fimilar gold stag that symbolise the world famous team. Munster rugby have their own website and its the best online resource for all things rugby in Munster. The best thing about their website is the domestic section where you can get all the latested news from club rugby in Munster.

Fixtures for all of Munsters matches are posted at the start of the season with ticket information. I’am lucky enough to be able to go to matches regularly and rencently went to Munsters heineken cup clash with Toulon. There is no greater feeling than walking towards the fortress of Thomand Park through a buzzing Limerick city with excitment that only match day brings! A position with a healthy view secured I setteled into the world famous atsmophere of Thomand Park. The usual pre-match rituals took place, the supporters club chior sang the classics and the Arcana drummers got the crowd hyped up.

The start was hardly one that anyone expected when Toulon hooker Jean Phillipe Genevois scored a try in the opening minute that Felipe Contepomi converted for a seven point lead. This however focused Munster minds and 8 minutes later they were rewarded with a try from a beautiful reverse pass by Peter Stringer.

Munster settled into the game after that and followed up with well worked tries form Tony Buckley and Doug Howlett. The half finished 21-10 to Munster. At half time there was a kick and catch competition for charity.

When the sides came out for the second half Pierre Mignoni had been replaced by Laurent Magnaval and after O'Gara had stretched Munster's lead with a 46th minute penalty Toulon brought on Jonny Wilkinson He moved to out-half and immediately gave a new energy and direction to his outside backs. Man of the Match Mick O'Driscoll scored the steadying and bonus point try in the 58th minute and shortly after when O'Gara sent one of his trademark kicks into the space behind the defence, into the right hand corner, Howlett homed in, outwitted two covering defenders to scoop and score. Toulon scored a consolation for the visitors five minutes from time but Munster got the last say with a try from James Coughlan. There is nothing like a win in Thomand and Limerick celebrated accordingly.