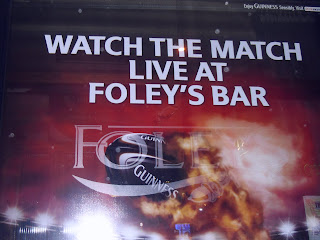 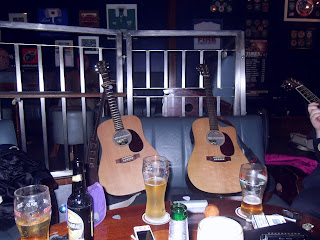 Foley's Bar is on lower Shannon Street in the centre of Limerick , there's live music there 6 night's a week and a great atmosphere . I was lucky enough to get a invitation to play there on a Wednesday night in August and although I'd prefer to be at home studying I decided to give it a shot . The session revolves around the "Sims Family " , the two Girls are sister's who along with their brother Garry sing and play guitar. They have amazing voices and beautiful harmonies and some mean guitar picking into the bargain . Also turning up "Joe Browne " who has been described as a Limerick Legend more than once and I 'm sure if you caught his band in action "The Dirty Dawgs". you'd know why .
See footage of Joe and the boys on"http://bocktherobber.com/2009/08/joe-browne-at-dolans-limerick" along with plenty of other Limerick acts . Check out ''Jane Frazer '' in particular , one of my own personal favorites , now living and performing in London but she returns home now and again to play in Dolan's .

The sessions are every Wednesday night and it kicks off about 9.30 .

I feel really honoured to have been invited to take part in these sessions , its been ages since I performed in public and I find it very relaxing and enjoyable . It gives me a chance to play my 5 string banjo and improve my fingerpicking technique and I've even been known to sing a song or two . So you can't afford to miss that .
The only thing that might be off putting for most of the class in the generation gap , not too many fine young things tend to show up for these sessions . So if you're out on the town looking for love, this might not be the place for you . But if you just want to have a good time , drink a few beers , play some music and sing some songs ,come along .
Mike Kenny
10003267
Posted by Digital Media Design @ UL at 5:03 AM