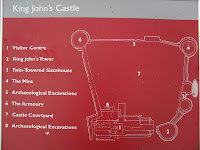 It was a Thursday, and I still couldn’t quite decide upon what event or attraction I wanted to attend for our class assignment, when eventually, I came across a website called Shannon Heritage.ie. After discovering this website, I noticed a large number of attractions in Limerick city, and thought, being as I will practically be living here for the next four years, I ought to suss out some of what beauty the city has to offer, thus beginning with, King Johns Castle. 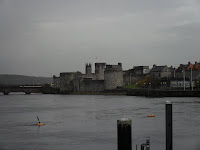 I had barely stepped off of the bus at William Street and arrived at the tourist info. office, when from across the Shannon I could see the magnificently built stone walls and towers of King John’s castle, towering above the surrounding shops and housings. 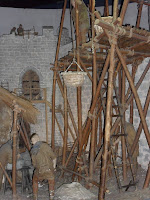 On entry, I was met with a warm welcome (on an especially cold day) by the staff of the castle, who briefly guided me on parts around the castle and what sections were where, before eventually paying my bargain fee of €6.65 for a student visit, and set off through to area 1 (of 4). In this area, was a small room informing on the archaeological side of things, including finds of jewellery and pottery, which showed a link with European trade at the time in Limerick, and explaining the materials used to bind limestone rocks, such as water, mortar, lime, river sand, and even ox blood. 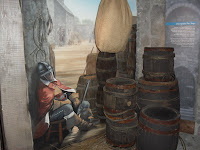 As I went upstairs to the second area, I was greeted by an audio commentary on events that took place in, and around the time of the castle’s occupancy, such as the castles completion in 1212, how it had eventually been repaired following an invasion by Edward Bruce in 1322, and finally, about the castle being under siege in 1642, resulting in and underground, mining war breaching the castle walls. 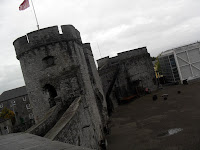 I followed a long and winding staircase leading from area 2, to the entrance again, and outside onto area 3, the courtyard, which was filled with medieval components and monuments, such as a hanging stage, the stocks (used as a form of humiliation for punishment), a wagon cart, and so on. Here I could wonder around each tower 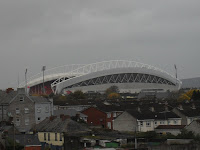 , including one with a mint coinage display, and another with an artillery set-up. The best bit I found with area 3 of the castle, was the freedom to roam around the castles high walls, which gave an amazing view overlooking the great river Shannon, and the more modern, Thomand Park from a distance out standing numerous buildings.

Finally, on coming to an end of the tour, I exited the courtyard through to area 4, an underground archaeological area showing previous excavations, and the miners underground tunnel, used as a defence against breaches of the castles walls, before climbing yet again, another stair case, which opened out onto a souvenir shop, and then to the castle entrance again.

All in all, I honestly can’t complain about the day I had here at King John’s castle, I found it useful in broadening my historical knowledge of Limerick, and for the price of €6.65, followed by a return bus ticket back to the University at €3.20, it was clearly a small fee well spent! 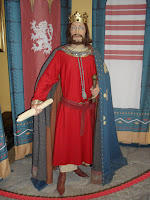