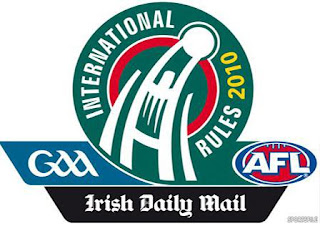 It was a cold, calm evening as the international rules fans made their descent upon the the glorious Gaelic Grounds for this year's first test on the 23rd of October. Expectation was in the air as the two teams made their way onto the carpet-like pitch for their warm-up. Cameras flashed and eyes darted as players like Grahem Canty and Bernard Brogan stretched under the glow of the floodlights.
The roar of the crowd was deafening as the ball was launched into the night sky at 7pm by the one of the two referees. The Australians showed their professionalism right from the off as they put the first few points on the board. Indeed, it seemed the men were being sorted from the boys in this almost depressing fixture. 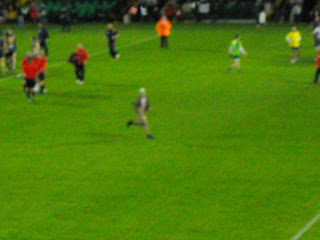 There was a groan as the first quarter drew to a close, with the lads from down under in the lead after hardly breaking a sweat. The second and third quarters followed suit and affairs really looked bleak for the men in white and green. Tension was momentarily lifted as a streaker ran around the pitch followed by several unfit men sporting glowing yellow suits.
Finally the spectacle rocketed into motion as the Irish team at last seemed to join the proceedings. The Australians were restricted to no score as the Irish scored a fantastic goal through Bernard Brogan to leave the score delicately poised with a 7 point deficit going into the second test in Croke Park next weekend.

The over-excited Irish fans flooded the pitch to greet their heroes much to the disapproval of the security. Lets hope they will be as impressed in Croke Park next week!
More information can be found from the following sources:

Ticket information for the tests was found on: http://www.ticketmaster.ie/