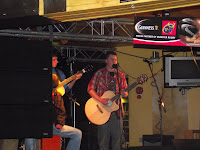 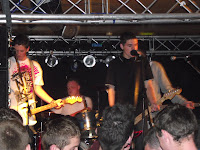 I immediatlely thought that this would be a good idea to do my assignment on as I have a keen interest in music. It was very beneficial to me as I didn't have to go out of my way trying to get transport to and and from the event because it was held on the UL campus. The tickets were also very affordable at €5 per ticket. 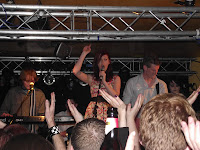 Fight Like Apes/UL Live! Final took place in The Stables on 21st October 2010. UL Live! is a battle of the bands type event with the winning band getting their song recorded and released in HMV. I deceided to show up early with my camera and I managed to get to watch the soundcheck. I didn't know any of the bands competing in the event but this didn't hinder my enjoyment of the event.All the bands put on a great show, performing their own original songs along with some cover songs. The event kicked off at 9 p.m. with Phillip, followed by Blank, then Rabid Fox and ending with I Caught Fire. 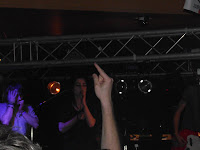 Fight Like Apes started their show sometime between 10:30 p.m. and 11 p.m. The floor filled up very fast with everyone wanting to get up close to the stage to get a good view of the band. The lead singer interacted with the crowd numerous times during the show. Both the band and the crowd were very energetic. Fight Like Apes were definetly the highlight of the event and they put on an amazing show. 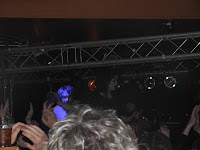 The winner of the UL Live! final was I Caught Fire. They definetly were the crowd favourites and I was told that they were the favourites to win and surely enough they did. In my opinion they put on the best performance out of all the bands competing.
It turned out to be a great event and I enjoyed every moment of it. I know that I made the right choice in choosing it as my assignment.
http://twitter.com/#!/ulmusicsoc
Eoin Murray, 10108939