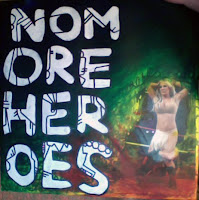 The gig was a 7 inch split vinyl release party for Deviant & Naieve Ted and Cities, with performances from both artists and DJ sets from Jimmy Penguin and Spin FMs Peter Curtin. The Deviant track is called No More Hereos a freak folk hip hop excursion, on the flip side is Cities track Satellites a space rock expedition with electronic elements. It was on in the basement of Bourkes Bar 1st October at 9:30. The gig was being run by the Stress Debt ChestPains group, and it was the Limerick leg of their tour.
I heard about the gig on facebook so I made my way down to Bourkes, formerly Molly Malones, is an ideal venue, it's a nice old style drinking emporium. It has the advantage of having a downstairs basement with a separate bar and it's own side entrance.
I really like the manifesto behind the group. "Stress, Debt & Chest Pains is not a record label. Its a more subtle way of getting good music to the people who want it. No mail order, paypals, websites, baskets. Nope. This is hand-to-hand trading. We'll distribute a series of grandiose musical releases in small limited quantities and in various formats when we feel like it. And that's that" In todays world this makes economic sense while also making the act of purchase a much more personal experience. All the 7 inch records were hand painted by the artist's which is a nice touch.
The night started with a DJ set from Peter Curtin playing tracks from the likes of Flying Lotus and the Menehan Street Band. Deviant and Jimmy Penguin were up next. They use two record decks, two Rane TTM56 Dj mixers, and a Boss Looper pedal as a means of creative expression. They make records from records. I especially liked the part where they drew on old folk records and gave them a modern edge with a emphasis on heavy drums and bass.
These guys run the Community Skratch Games down in Galway every April which is getting bigger year on year, and as a collective they've released a mind boggling amount of free music through their website nozl recordings .Catch them at a town or city near you.
Finishing the night off were the excellent C!ties from Ennis. They're a young and upcoming band with a big sound. They're a 3 piece, with a drummer, guitar player, and a bass player who also doubles up on Synths and sounds from his MacBook. They're sound is largely rock based with an emphasis on some dreamy electronica in the breakdowns. Their drummer was the standout performer for me, it's rare to get such a technically proficient performance from a drummer of that age. Keep an eye out for these guys, I expect big things to come. Check there music out on myspace.
You can see a brief video from the start of the night with Deviant and Jimmy Penguin on the decks on facebook.
Jason Doyle 10048464
Posted by Digital Media Design @ UL at 2:59 PM