Fight Like Apes and UL live final in the Stables 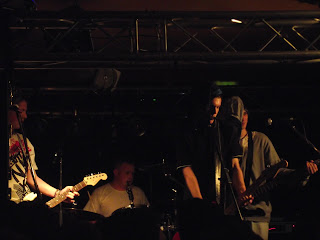 Event: Fight Like Apes & UL Live Finals
When: 21st Ocotober
Where: Stables in the college Court 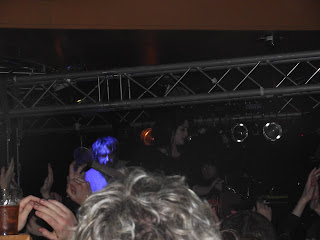 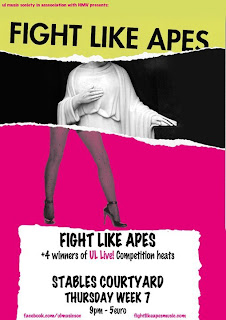 With the colder nights of winter upon us and the chilly mornings into college now setting in a good gig was in order to warm oneself! That gig was indeed the Fight Like Apes gig down in the stables on the 21st of October. Beginning at around 8:45 it was also the finals of UL live which gave much to the added attendance. The stage was set like a platform you’d see in an airport for the aeroplane’s equipment and the PA system including amps and such was, for lack of a better word awesome!
Choosing to write about this as the event was possibly because the idea hit me when I got involved helping out when everything was being set up a few hours before, I thought why not write about something you were, in some form involved in setting up, however small and insignificant that may have been! Arriving late myself at first I had unfortunately missed the first act in the UL live competition which is a shame because I was told the acoustic set of Philip were a definite one to check out. I Caught Fire from Tipperary were one of the main UL live contenders as they had the advance (unfair in some ways) of having a single coming out and already a wide fanbase over Ireland. That said, they do deserve the credit they get and certainly are one of the better underground bands in Ireland at the moment! Their setlist stood out for me more so because I had already seen them and was already extremely impressed. They went on to win the actual battle of the bands to much of the crowds joy! A well deserved win and commiserations to other bands involved such as Blank, The Rabid Fox and The Loaded Kings who did a great set of their own songs!
http://www.facebook.com/ulmusicsoc


At around half 10 Fight Like Apes came out and turned what was already a great night into a fantastic one! Their set was a good choice of their crowd pleasers mixed with some of their slower songs which kept the flow going really nicely. The crowd went wild and their interaction with the audience was something that really impressed about their overall show! A highlight was when the lead singer Mary-Kate jumped into the crowd during the song Poached Eggs which set the crowd into a massive array of arms being hurled around in the air and overall craziness!
A definite reason to go see this band again who I had only heard about before this gig. It was an overall great night of fun, music and of course the odd bit of alcohol which for some people enhanced the experience!