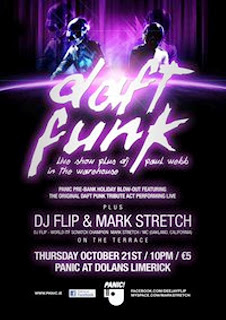 On the 21st of October I attended a live gig in PANIC AT DOLANS LIMERICK; the line up for the night was a very exclusive and entertaining. The lineup included DJ FLIP & MARK STRETCH and the headliner DAFT FUNK. For those who are not familiar with any of these artists work DJ FLIP is the ITF(International Turntable Federation’s) World Scratching Champion 2003/2004 .MARK STRETHCH from California , Then last but not least the headliner DAFT FUNK an amazing DAFT PUNK tribute band .

Leaving at 9.30 on the night of the event I got a taxi at my house and headed towards Dolans. As I was new to the area I had never been to Dolans/Panic before and I was excited to be finally going .I had heard so much about Dolans and was dying to find out where the place exactly was and what it looked like. From what I had been told the place sounded amazing and the place for live music in limerick, as I entered I was surprised with the layout of the place. But it surly met up with my expectations!!!

With an entry fee of only five euro and with the super lineup the place was packed with lots of crazy music fans, all with high expectations for the night.

Then as the music started there was an awesome vibe from the crowd of people. DAFT FUNK were playing in the area called the warehouse and they kicked it off with one of DAFT PUNK’S hits .The crowed enjoying what they were hearing was longing for hit after hit for the duration of the gig. Throughout the gig DAFT FUNK got a great response from the people of limerick and in combination with the truly amazing light show the mood was set for an epic night. Later once DAFT FUNK sadly finished up DJ FLIP & MARK STRETCH started their set on the terrace.

On the terrace where DJ FLIP & MARK STRETCH were set up I watched as they performed their intro with some unbelievable scratching. Immediately the crowd’s attention was caught. The terrace filled rapidly. I enjoyed the scratching and appreciated the fact that I had the opportunity to listen to world scratching champion playing in limerick city although I wasn’t particularly into that kind of music I still enjoyed it and .

Looking back on the night I thoroughly enjoy myself, from going to a new venue and listening to some live music the night and event couldn’t have gone better.