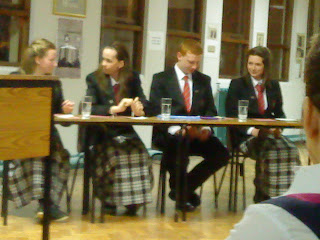 A debate in the Concern series of debates took place on October 13th 2010 inLaurel Hill Cholaiste between the pupils of Laurel Hill and Hazelwood College,Dromcollogher. The motion for the evening was “Are GMO’s necessary to fightworld hunger”. This was the first of four debates in the Concern series and was abrilliant start to proceedings.
The debates are Concerns flagship schools activity and give students the chance toresearch and debate issues affecting the developing world. These debates have beenrunning since 1984 and over 45,000 students have taken part. The long term hopeis that those involved will become lifelong advocates on issues relating to poverty,justice and human rights.
Laurel Hill fielded a team of four young ladies while Hazelwood College’s teamcomprised three female and one male student.
Laurel Hill argued very competently that GMO’s were necessary to prevent worldhunger as they could be designed to withstand extreme climates, global warming andattacks by pests. In their counter argument Hazelwood College explained that the riseof large corporations who were developing GMO’s were going to cause more damagethan they would prevent. Already they explained that there is evidence of people inthird world countries unable to purchase GMO seeds as they are too expensive. Theyalso pointed out that while there is sufficient food to feed all the people in the worldtoday we still have people starving with the hunger. This is often the result of greedor corruption rather than a lack of food or resources.
The girls from Laurel Hill were by far the most experienced side and I learned afterthe debate that this was in fact the team from Hazelwood College’s first debate.
While both teams presented an excellent argument the captain of the Laurel Hill Teamwas excellent in her summing up of the debate. She was definitely the star of theshow and given that both teams were equal at that point her final speech was morethan good enough to tip the balance.
Laurel Hill emerged victorious. I was sad to see the poor attendance on the nightas this is an excellent medium to explore the problems facing Concern in thirdworld countries. However the event is very badly advertised and even within theparticipating schools, no attempt is made to encourage pupils not directly involved inthe debate to attend.
Terry O'Shea
09003150
Posted by Digital Media Design @ UL at 6:32 AM