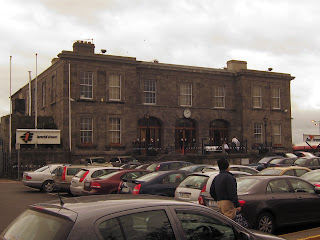 Colbert Station is located on Parnell Street, in the city centre.  The site serves as the city's transport hub, facilitating the regional and intercity train and bus termini of Iarnród Éireann and Bus Éireann.

The station was designed by Sancton Wood and  built in 1849 during the famine. It was renamed to Colbert Station in 1966 in honour of Cornelius "Conn" Colbert, an Irish rebel from Limerick who fought in the 1916 Easter Rising .

Today, the station is bustling. However evidence of purposeful modernisation is nowhere to be found. The legacy design, historic as it may be, along with the subsequent (apparently) ad-hoc repurposing of indoor and outdoor space amounts to a dysfunctional and aesthetically nauseating visitor experience. One glance at the décor, a higgledy-piggledy pastiche of 19th century engineering and what I'm guessing is turn-of-the-century to 1980s Irish interior design could very well be the deciding factor in a brave passenger's failure to subdue what was, up-until-then, an heroically postponed vomit.

Readers who visit the Wikipedia page will be surprised to learn that the beautiful Westlife once descended on Colbert's platforms 1 & 2 to shoot part of the video to the admittedly brilliant pop ballad, My Love. Although I recommend viewing the whole thing so as not to miss the finely acted intro, skip to 01:35 to see the relevant shots (WARNING: Close-ups of Brian McFadden).

While I frequent the station regularly on the commute from Ennis I have nothing of significance to report so far. I have however observed that, of late, my relationship with the attractive ticket office woman whom I hurry past vacantly with stone-faced determination every morning is not progressing as hoped.