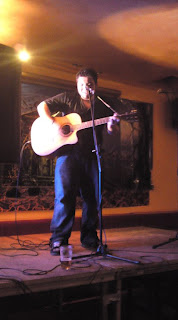 On Tuesday last I decided to head down to the stables club to check out the talent show they were hosting which I had heard so much about. Having found out about it after my girlfriend entered, I decided to check out the UL's Got Talent website to find out more. I discovered that it wasn't just any old talent show being put on for people's amusement, and that it was in fact a fundraising event for Scholar Games Ireland. As I was unable to attend the first round of auditions becasue of work, I decided to attend the second round to see what it was like. In terms of sheer entertainment value, I was not disappointed!


I arrived at around 9:25. The acts were all preparing for the 9:30 start, which turned out be a 9:45 start but there were no complaints! We were introduced to the judging panel for the night, Dave Mahedy, David Collopy and Natasha O'Connor. They all seemed in good form, and were ready for whatever would be coming their way that night. It turned out that to vote for an act you had to pay 50c, which of course went towards Scholar Games Ireland. There were also offers to buy raffle tickets in exchange for a free ticket to the Lodge, which i thought was a smart way to encourage more support for the fundraiser. 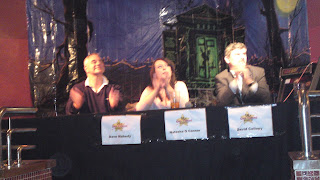 Anyway, enough about that, on to the acts themselves! There was a variety of talent of all kinds on display that night, from dancers to singers to comedy-transvestite acts (Yes, you read that right), all of which were very entertaining and extremely talented in their own right. Two of my favourite acts were Lady and the Transfusion, and Sof. An acoustic guitar player and singer, Sof chose to go up first. Even the judges acknowledged this as an incredibly tough thing to do, and praised him for it. Sof performed two songs, the second of which was a piece by Damien Rice. Apart from the obvious talent he has both on the guitar and vocally, what struck me as being the most intense aspect of his performance was the sincerity and emotion with which he palyed. He seemed to be truly lost within his music, which only added to his performance. The judges were also quite impressed, and particualrly liked his second song. In terms of raw talent, he was one of the best acts of the night.
The other act which I enjoyed, due purely to how fun they were to watch, was Lady and the Transfusion. This comedy duo, comprised of a man dressed as a woman and vice versa. 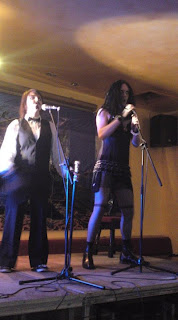 They performed a medley of songs, made all the funnier by who was singing them. The best of course was when they performed 'Time Warp' from the cult favourite 'The Rocky Horror Picture Show'.The man dressed as the woman in particular was quite funny, however I think the audience were thankful that the act finished up when they did, as he was beginning to remove more and more items of clothing towards the end!


All in all, the night turned out to be a great success, with the promise of entertainmetn delivered in spades! There was also quite a bit of money raised, which is great as well. I really enjoyed myself, and would recommend everyone go to either the next two rounds of auditions, or the final which is on in November.


To finish up, I'll leave you with two videos of the acts I've mentioned. Enjoy!

Email ThisBlogThis!Share to TwitterShare to FacebookShare to Pinterest
Labels: university of limerick talent show ul's got talent sof lady and the transfusion