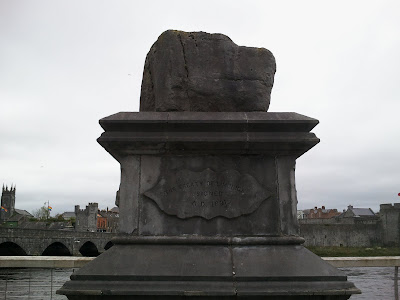 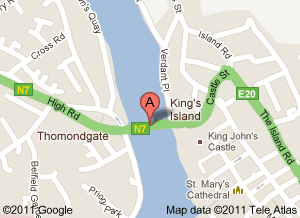 The Treaty Stone is located on the River Shannon
opposite King John's Castle on the other side of the river
next to the Thomond Bridge in Limerick.

During my first week in Limerick I was doing a little city tour with friends. With the help a little city map from Limerick where all the important places of interests are marked and we discovered a lot: King John's Castle, St. Mary's Cathedral, Limerick Greyhound Stadium, Belltable Arts Centre and a lot more.

One of the most interessting places we visited was the Treaty Stone. It was around lunchtime when we arrived the stone and decided to make a little break there. It was really awesome sitting on the river side with friends and enjoy the surrounding. We were really interested in the stone, because the stone is not such a pompous monument, but it marks an important point of the history of Limerick. There are a lot of pictures around the stone and the inscription on the monument refers to the treaty, which was signed in 1691.

That sounded really interesting for us and when we were back home a friend of mine looked up the historical meaning of the monument since we were really curious: The Treaty Stone is a limestone and a symbol for the Treaty of Limerick signed on the 3rd of October 1691. The reason for the treaty was the war between William III of Hanover of England and his Father in Law King James II.

The treaty was signed on a stone and it actually consisted of two treaties – a military and a civil article. The Treaty of Limerick gave Limerick also the name 'Treaty City' and was moved several times in the past to different places around where it is located now.

Email ThisBlogThis!Share to TwitterShare to FacebookShare to Pinterest
Labels: http://www.blogger.com/img/blank.gif