The first thing I done when starting this assignment was look through the available resources to find a place that was of interest to me. From looking at Limerick's Life, I found a link to Thomond Park and it's guided tour of the museum and stadium. I booked the tour for Thursday 20th of October. 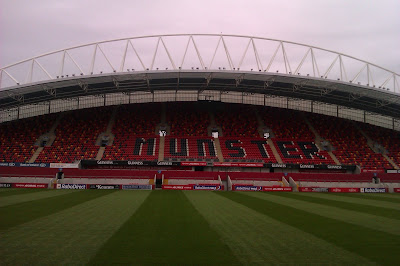 Thomond Park is most famous for being the home of Munster Rugby, and it also accommodates other events such as concerts and soccer matches. It plays host to most of Munster's home games in the Heineken Cup and Rabo-Direct Pro 12 League The stadium was refurbished in 2008, and it is now one of the most unique stadiums in Ireland. The tour took place over an hour and it went from a walk around the museum, into the dressing rooms and out onto the stands overlooking the pitch. The museum contained various bits of memorabilia from Munster and Thomond's past. One of the greatest games of Munster rugby history took place here on October 31st 1978, when Munster beat the All-Blacks, 12-0. They still remain the only Irish team, including the national team, to have beat the New Zealand All Blacks. There was match programmes, tickets and jerseys on display form this game. 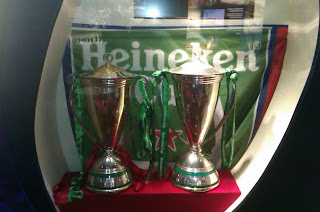 The greatest achievements for the team in recent times, is the winning of two Heineken cups (2006 and 2008), which are both on display in the museum. In 2006 they beat Biarritz in the final and in 2008 they beat Toulouse. On display as well, are Paul O' Connell's two Heineken Cup medals, which he has donated to the museum. Other players such as Ronan O' Gara and Peter Stringer have donated items such as caps, jerseys and boots to the museum also. 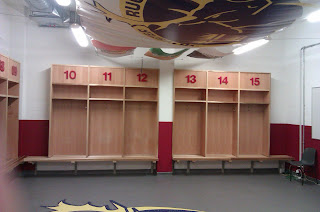 The next part of the tour took us around both the home team and away team's dressing room area. The home dressing room is decorated to the request of the Munster players. On the ceiling is a massive Musnster flag, surrounded by the flags of the six counties of Munster - Tipperary, Cork, Limerick, Clare, Kerry and Waterford. The centre of the floor is also painted with the Munster crest. There are also small flags from South Africa, Australia and New Zealand over the lockers to represent the Munster players that come from these countries. Each seat/locker is numbered so that each player gets the locker space corresponding to their squad number. Being in the dressing room was an experience because of the range of emotions that have taken place in there over the years - from ecstatic victories to bitter defeats. Another part of the tour was supposed to involve walking from the dressing room, down the tunnel and out onto the pitch as the players do, but unfortunately there was maintenance works taking place in the tunnel at the time so this didn't happen. We did get to stand out on the terrace and look out over the pitch and stands.

Since it's redevelopment in 2008, it has the capacity of 26,500, with 15,00 of those being seated. The North and South terraces remain the same as they were from the original layout of the stadium. The layout of the stadium gives Thomond Park one of the best atmospheres for a rugby match in the world.
Overall I think this tour was well worth the time and is a must for any Munster or rugby fan, as it gives you a look into the history of one of the greatest Rugby teams in the world and makes you feel part of it.