On Thursday the 20th of October, my friend and I visited the Saint Mary’s Cathedral in Limerick city. I don’t know Limerick well, so when given this assignment I looked up limerick.ie which gave me a list of 50 things to do in limerick. I choose Saint Mary’s Cathedral because it was high on the list, has good reviews onTripadvisor and is less than a 10 minute walk from the city centre.

The cathedral was built in 1168 and is the oldest building in Limerick which is in daily use. It is dedicated to the Blessed Virgin Mary. At the side of the building is the great west door which is used only on ceremonial occasions. On the stones surrounding the door, there are marks where during sieges the defenders of Limerick used to sharpen their swords and arrows. 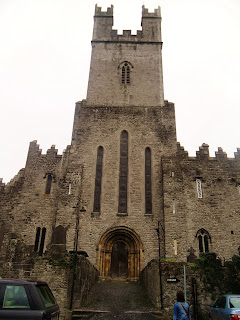 We had to pay a donation of €3 entrance for sightseeing which is used to pay for maintenance. On entering we received a guide giving us a step by step tour of the cathedral. It is full of historic monuments and information. 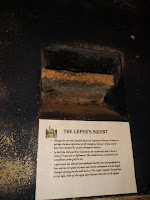 One thing that caught my attention was the leper’s squint. This is a small rectangular hole in the wall located on the north wall, tucked away in the corner. In mediaeval times lepers were not allowed into churches, but were able to receive communion through holes in the wall.

At the top of the church is the altar, which is the biggest in Ireland and the UK. It is carved from a single limestone block, 13 feet long and weighs more than 3 tons. 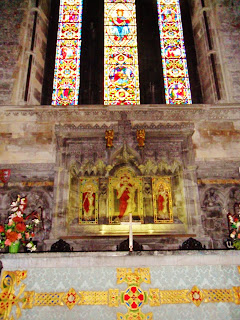 In 1651 during the Cromwellian campaign in Ireland, it was used as a stable by the parliamentary army. Also there are canon balls hanging in the archway from the 1691 sieges of limerick by William of Orange and Ginkel.

St. Mary’s Cathedral is full of stories, information from the past 843 years and is a wonderful building worth seeing.

It is open to the public and recital and services are held there regularly.