The Strand Hotel is situated on the Ennis Road in Limerick City.

The reason I have chosen to write a blog on this particular hotel is not because of it's beautiful view of the River Shannon or it's comfortable beds, but simply because of my personal experience in the hotel. If the songs "Glad You Came" and "All Time Low" sound some bit familiar to you, then you should have heard of an amazing pop band called "The Wanted".

In June 2011, I heard about a competition giving lucky winners a chance to meet the well-known band.
I decided to enter for the "craic" not knowing what lay ahead. I'm the kind of person that wouldn't win an argument but I enter these things anyway, hoping for the best. "Positive Outcomes Only", that's my motto. It was a simple competition, no hard questions or anything. Limerick's favourite radio station SPIN South West asked "if you could meet the wanted, what one question would you ask them?" So with a little help from my mother, I text in "if you weren't famous what would you be?"
About ten minutes later I received a phone call telling me I had won! I couldn't believe my ears! They told me that a friend and I would be brought to a private location by a private coach. I was so excited that I actually cried, just a few tears though, nothing major.

It was a great opportunity to have met the five lovely boys and I still thank SPIN to this day!

Meeting "The Wanted" has made me love them even more as they are friendly and genuine. I will continue to listen to their music and support them throughout their career. 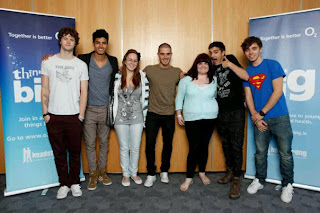 This is their newest song, "Lightning". Have a listen! They're brilliant.