My original intention was to visit The Citadel at the walls of Limerick, so a friend and I traveled into the city on Tuesday, 18th October to see it. Unfortunately there was some roadworks that prevented us from doing so... 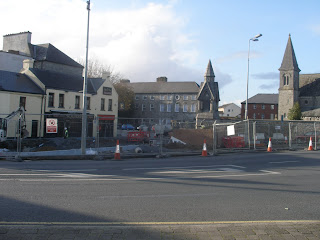 Fortunately, disappointment is a regular part of my daily life and, as such, am well able to make the best of a bad situation!

Located adjacent to the citadel is St. John's Graveyard, and located in graveyard (which itself, similar to the citadel, is located along the walls of Limerick) is the Unthank Crypt. 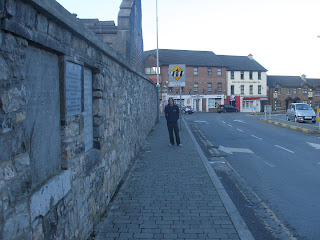 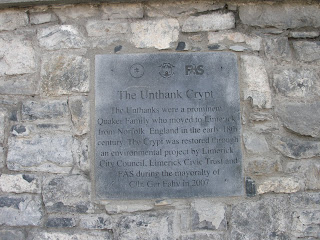 As stated by the plaque located to left of the wall near the crypt, the Unthank family were "a prominant Quaker family who moved to Limerick from Norfolk". When the family came to Limerick in the 1700's, they quickly became well known in business and in the medical profession. The Limerick Families website has a downloadable PDF of an insightful newspaper article in reference to the restoration of the crypt. It refers to how, by 2004, the crypt had gone into disrepair and had been deemed "a dangerous structure". The East Wall was carefully rebuilt by the Limerick Civic Trust, and even from just observing it with my own eyes, it is clear that they did a very good job of it.
I was, and still am, very glad that I managed to find this monument, especially after the disappointment of the citadel being inaccessible. My friend and I had already gone through the trouble of taking a bus all the way from the University to the city, and had walked from William Street through to Upper William Street and Cathedral Place. It is only by luck that we managed to spot the crypt. I was very impressed by the great care in which the crypt had been restored. It shows how much the city council appreciates its city's history and the care they take in preserving it. I would say that it is a must see for anybody visiting the city's historical landmarks.

We took a few photos (two of which are shown above, as well as a photo of the roadworks) and read the plaque, before heading back into the city center for a while and then headed back to the University.