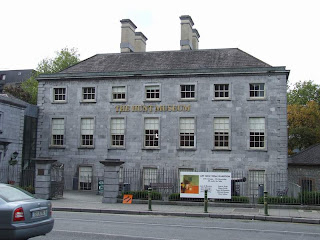 I found out about The Hunt Museum from limerick.ie and I visited it yesterday, the 19th of October. After a little bit of research on the Hunt Museum website, I found out about John and Gertrude Hunt. They were antique dealers but they collected many pieces for themselves, selecting each piece according to the quality of its design, craftsmanship and artistic merit. This collection is now housed at the Custom House.

One of the first things I saw when I arrived was a life size horse decorated in bright colours: "Da Horse Outside Da Hunt". It was, I learned, inspired by the song “Horse Outside” by the Rubberbandits and was created by the children of the Southhill Outreach Program. The pictures on the horses back depicted things from the museum. 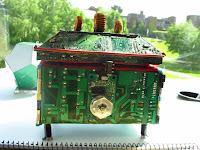 It was only when I went inside that I found out about the exhibition of art inspired by Steampunk. It turns out lots people were inspired by the pieces in the Hunt collection. Students from the Interactive Design Centre had taken different pieces, such as a medieval Arab-Sicilian casket, and remade them using “upcycled” electronic and computer equipment. My favourite was the remake of a Picasso painting. The painting was a menu card he drew for a café called the 4 cats and it was remade using camera film, keys from a keyboard and film from a cassette tape.

There were lots of interesting things from the original Hunt collection as well, such as the Antrim Cross, the jewellery from the eighteenth and nineteenth century’s, many paintings by Jack B Yeats, the carving by Thomas á Becket (which, I thought, was amazingly detailed for its time) and dresses by Sybil Connelly (they were just so quaint and pretty!).

You can find lots of information about the Hunt Museum on their website.