I chose to write about the peoples park as I found it to be a secluded oasis in the middle of a bustling city. A place where one can easily get lost in nature, peace and serenity and clear their mind. Like the Phoenix Park in Dublin (only much much smaller), The Peoples Park offers a getaway from citylife even if it is just for a moment.﻿ 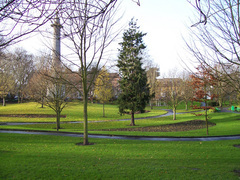 The Peoples Park is located on Parnell St. just across from the bus and train station, giving tourists a great first impresion when they arrive in Limerick City. It is inhabited by a large selection of evergreen trees, giving the park a sense of fullness and life all year round. The Park was opened in 1877 in memory of Richard Russell, a local businessman. Located inside the park is the Limerick City Gallery of Art, a band stand, along with a childrens playground and many areas to just sit and enjoy its beauty. 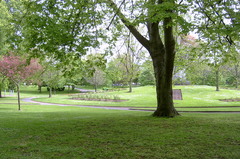 The park won the Best Local Park Special Category Award in 2003 and the award aims to encourage the success of parks like this in towns and cities all over Ireland including, Galway, Dublin and Cork. When asked, a number of visitors to the park told me that it was a great place to go for a few hours with kids, or just to go have a picnic. The majority of people admitted that weather permitting they would certainly go again and you can easily understand why.
From these few pictures it is easy to understand how one could get lost in the beauty and heritage of the park. Its also easy, once you've visited the park, which I urge you to, to forget that you are in the heart of a busy, buzzing city on the Irish coast.
http://www.limerickcity.ie/OurServices/Environment/ParksandOpenSpaces/PeoplesPark/
Eoin O' Donohoe
11139013﻿
Posted by Digital Media Design @ UL at 5:59 AM