Having been given this assignment I began researching and looking into interesting sites around UL but one particular site caught my attention. I read about a Jewish cemetry in the Castletroy area. This intrigued me and myself and a friend in my course decided to go for a drive and see the site for ourselves. Having pulled into a narrow street we came across the small cemetery, and decided to investigate further. It was unusual, in that there was only a small number of headstones. We then had a look around and we saw this monument in memory of a Jewish soul. 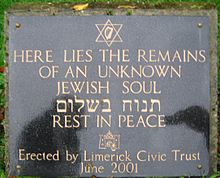 I thought this was interesting as I was not aware that there was a Jewish community in Ireland as far back as the 18th century. It encouraged me to begin researching and looking into the history of this intriguing site, however there was little information to be found. Although through my research I found an interesting wiki on the history of Jewish descendants in Ireland.
There was several facts that caught my attention having read this wiki. It stated that census records of Jewish descendants in Limerick dated back to the late 1800's. I learned that in 1878 a small minority group of Lithuanian Jewish tradespeople began arriving in Limerick having fled persecution in their homeland of Lithuania. This particular community founded their own synagogue and cemetery (the Castletroy Jewish Cemetery). 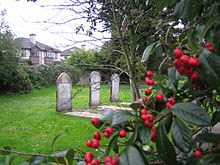 They also formed an accepted part of the city's retail trade industry. It then went on to explain the Lithuanian Jews struggle for respect in the Limerick community. It said that on Easter Sunday in 1884, there was a series of violent attacks and protests. The wife of Lieb Siev and his infant were injured by stones and her house was attacked by an angry group of protesters. Two families were also beaten in 1892 and a stoning in the year of 1896. Among all this persecution against this Jewish community they had great support from the Protestant community, however many still fled from Limerick to Cork,with the intention of travelling from Cobh harbor to America in search of a better life.
When I found this site I never would have expected to discover so much history behind one small cemetery. I am glad to have come across this little known Jewish graveyard, it has led me to learn about the history of the Jewish people in Limerick. However I would love to have been able to find out more about this particular cemetery.
Ian Ronan (11132485)
Posted by Digital Media Design @ UL at 2:02 PM