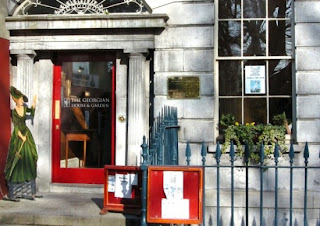 One of the Local Historical places of Intrest that caught my attention was The Georgian House and Garden. The house was originally built in 1830 and built with Georgian architecture.

When the house was built Edmon Sexton Perry was the force behind the building of Georgian Limerick. James Payne was the architect of the Georgian design. It was restored during the years 1996 - 1999. The house is refurbished so well that it holds some original decor like skertingboards and banisters on stairs. There is also original pattern wall paperthat was reproduced from the pattern found on the walls.

All of these buildings came before The Victorian buildings around Limerick which came in the nineteenth century and also had its own private garden at the back of the building which could only be accessed by the family living there with its own garden key.
Although the garden is considered small is because it also looks onto the shared gardens adjacent the buildings. These gardens were later bought by Limerick Council for the People and became known as People's Park. The Georgian House and Garden can be found on the link -

I had visited The Georgian House last year but in recent months it had to close to visitors because of funds, however it still remains open to tourists on Limericks walking tours. These tours were set up by the Limerick Civic Trust (Heritage Society).

This undertakes projects for improvisation on Limericks enviroment. It is an independent non profit making society and is regestered as a charity. In recent years they have restored historic sites and buildings all around Limerick. Details of this reference can be found on their webpage. See
www.limerickcivictrust.ie/projects-restoration-past.html.

There is a  very good in depth video tour of the Georgian house features and architecture can be found on the youtube link- http://www.youtube.com/watch?v=sru_baUEphw.
This was filmed and uploaded by I Love Limerick which cover events, news and charites around Limerick City. Their homepage is www.ilovelimerick.ie
Posted by Digital Media Design @ UL at 6:46 PM