For my assignment, I decided to write about the Belltable Theatre, as it is quite well known in Limerick city, and I knew I would be attending it within the timeframe of the assignment. 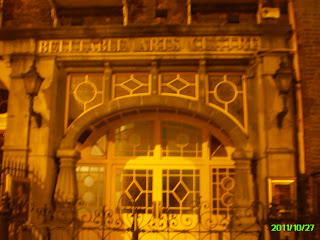 On the eve of the 27th of October, myself and two of my friends went to a show in this theatre. I have been playing guitar for 6 years now, and have switched teacher several times. However for 2 years I have stuck with my current teacher, Johnny, as he is a very talented man and had a very successful band in the 60's, known as "Granny's Intentions." My friend Alex was the person who originally introduced me to Johnny, as he also attended lessons with him, and nevertheless we were very excited to hear that in October, Granny's would be doing a reunion gig in their home of Limerick for the first time in over 40 years. Our friend Aaron who is also a very gifted musician accompanied us, as he knows Johnny through the Limerick School of Music. 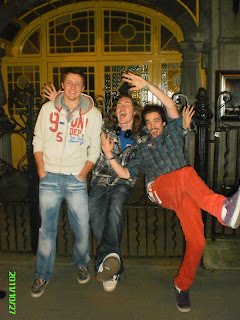 The Belltable recently refurbished their theatre hall, to accommodate a larger audience in greater comfort. This was my first time seeing the refurbishment as it has been many years since I was previously in the theatre. The result was that the theatre is now at a slanting angle, with everyone seated above the stage, although there really is no stage. This meant that it was quite difficult indeed to capture a successful clear photograph of the band, especially due to the exceedingly tall man seated directly in front of me. My best attempt shall be posted below momentarily.

Interestingly, Aaron, Alex and myself were by far the youngest members of the audience, with Johnny's daughter being the only exception. A man beside us joked, "Thanks for coming in and sitting down lads, you brought the average age down to about 63," to which I replied, "Don't be ambitious my dear man, I would've said 64." The band were exceptional, as all of the remaining original members have made a career out of music, either as teachers or songwriters. If you didn't know it was the first time these people had performed together in roughly 40 years, you would have imagined they had been playing professionally ever since the 60's. 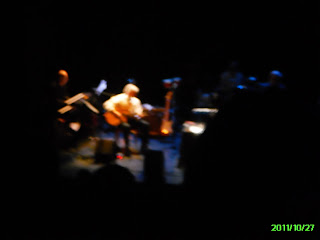 The man in white is Mr. Johnny Hockady himself! Overall, the performance was highly enjoyable, and we went for a few drink with the band afterwards, (a few too many at that), before calling it a night.
The Belltable is a fantastic theatre which hosts shows of all varieties, from musical to drama's and every member of the audience leaves feeling their money was well spent. I would highly encourage anyone looking for a different sort of entertainment to go and enjoy a show at the Belltable.
Their listings can be found at their website, which is located at Belltable Website.