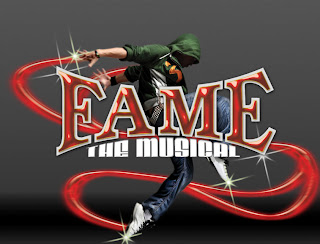 I’ve only ever been to two musicals before. Both being the same musical, just different productions. Two years ago, when a friend of mine asked me to go along to a production of RENT in The Olympia I was more than skeptical. When the show was over my mate was genuinely surprised, naturally expecting me to be at daggers drawn with him. I loved it.

And since, my attachment and appreciation of musicals has only grown.

Last night I found myself among so many bright and talented young stars as they put on an energetic, enthusiastic, placate performance in the University Concert Hall Limerick for the opening night of FAME. Before the cast even step foot on the stage it was clear this was going to be quite professional as the setup (Lights, Sound, Stage), from an aesthetic point of view, was impressive.

I knew I was taking a chance on this show. Even though I had heard of it, I never knew what the show was about. (Obviously something about fame but you get the gist of what I’m saying).

Trying to sum up the plot in a few lines, if you are like my previous self and haven’t a notion, I would put it as a group of culturally diverse young adults who go to study the performing arts in New York, all high on their hopes and dreams of one day “making it big”. What can I say? You either have an adoration for the oh-so-cheesiness or you don’t. I do! And am proud to admit it! If you realise and appreciate the raw talent these people have, the ‘cheese factor’ usually deviates to the back of your mind (“Usually” is quite a loosely used term I will admit). 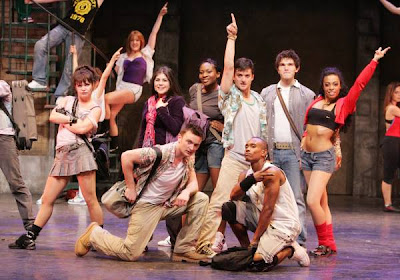 The lights go up with a full cast ensemble. Both “Pray I Make P.A” and “Hard Work” numbers were meticulously enacted in my opinion. Singing and dancing was to a tee. As the show continued, some of the accents I noticed were a bit iffy. However, the dancing and singing by far made up for it.

I had the privilege of having a close seat and noticed some of the facial expressions of the actors and actresses during the performance. It proved to me that this wasn’t some boring routine job for them. They looked like they were having great fun on stage and to me, being able to see them work and do something they love is inspiring.

Naturally, the role of the comedian will be one of the most memorable and ‘Joe’ didn’t disappoint, I must admit. His shining scene was with the Spanish dancing and attire. The red lighting here was first-class and excellently conveyed the mood – exuberant and electric. Good actor. Bad accent. Actually, the latter can be said for a lot of the cast and it would be one of the only negative points to make from the show overall.

Some other positive points from the show: Having to perform badly initially for their education to be believable. The way I see it, pulling this off must have been extremely tough as they clearly proved later in show that a lot of them are so experienced, whether it be dancing, singing or instrumental. The scenes alternated between the respective dance, instrument, and voice groups in the High School and then as a collective. I initially thought this provided good balance to the show but as the show hit the 3 hour mark in the final scene I couldn’t help but think the show could really have done with being a bit shorter. My ass can substantiate this.

Overall view: Convincing characters and each number was flawless but didn’t find myself emotionally drawn. I have yet to see another adaptation of the show so until then I think I can only be democratic about the subject and put it down to the script itself. Very enjoyable evening. 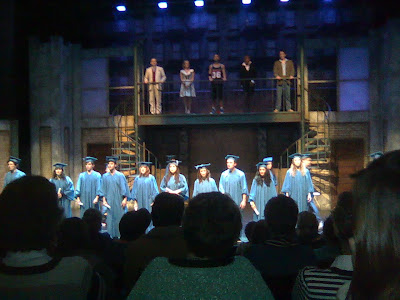