I first found out about this gig when I saw the band live in Cypress Avenue in Cork, when they were supporting My Passion. The lead vocalist ,of the band , told me that they would be performing in Limerick in the next few months, After, I followed the band on twitter, http://www.twitter.com/scubadice, for updates on when they would be in Limerick. After the dates were announced I purchased my tickets, which were affordable at five euro each.

The gig took place on Saturday the 23rd of October and began at about 1:30 pm. The gig was also part of their Halloween tour, which kicked off in Limerick, I thought this would be a good event to do for my assignment on as I am interested in music and this band is quickly becoming one of my favourites. Scuba Dice are an amazing live band and are well known in Ireland, as in 2007 they competed in RTE's "You're A Star". 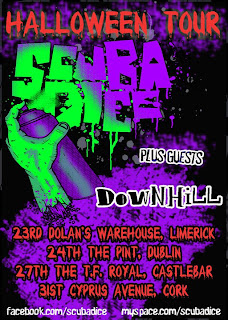 Unfortunately, I forgot my camera, therefore have no pictures of the gig. The show attracted a good crowd yet the gig was still intimate. The supporting band, Downhill , played a good set and had amazing energy on stage. They were also able to hold the audience's interest even though they are a pretty much unknown band. Their set lasted just under a half an hour. After, the anticipation set in as the crowd began to chant "Scuba Dice" and without much of a wait the band took to the stage, bursting with energy and started off their set with one of their new songs. The lead vocalist, Joe Grace, had a great stage presence and interacted with the crowd throughout their set. The set-list consisted of old songs ,such as "Made" and "Let Go", and newer songs from their recently released EP, "The Lost Art Of Romance Art Work". They closed their set with a cover of Greenday's "Holiday", a cover which gained them national recognition in 2007.

After the gig, the band met with fans and audience members, at the merchandise table, to talk about the gig, take pictures etc, etc. The gig was very enjoyable and I would recommend the band to everyone who is interested in punk rock/pop punk music. Scuba Dice also have a facebook page: http://www.facebook.com/scubadice