A NIGHT WITH FUTURISM

I have always been a big fan of live music and try to go to as many live acts as possible. No CD will ever replace the thrill of live music. I have been a fan of the small Cashel band called Futurism for a while now. I hadn’t seen them live in a long time so I went online to try and see if they were playing any time soon in limerick. They name futurism gets allot of hits from Google so it was of little use to me. I searched them on twitter but only managed to find an American band also called futurism. Disappointed with the twitter result I turned to my ever loyal Facebook and found very quickly that they have a very active Facebook also with links to an equally active MySpace. I became friends with them on Facebook immediately and explored their page. They have all of their band information along with videos and pictures from all their past gigs. Thir website is http://www.facebook.com/home.php?#!/futurismmusic 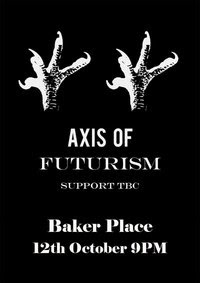 I got regular updates on what they were doing and what their future plans were. It turned out that they were playing a gig in a Limerick pub called Bakers Place on October 12th. With allot of convincing my roommates agrees to go with me to see them.

They loved them and are now also friends with Futurism. I noticed that on all the poster around they pub they had their Face book and MySpace addresses on them it is clear that having a big online following is very important. It seems to be the only way that young bands can get noticed in our modern world. After they were finished the band members made an effort to talk to many fans and inform them of their future plans. It was a great event and gave my roommates and I a chance to get to know some local limerick people, the walk home also helped us to get to know Limerick city centre. Over all it was a great night in Limerick for us new comers. We were very glad to see that they will be back in Bakers Place on the second of November and we all plan to go again.
Niamh Begley (10131256)
Posted by Digital Media Design @ UL at 12:31 PM