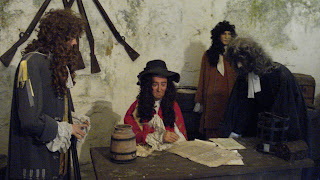 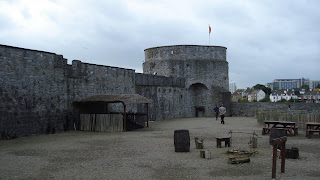 I recently visited King John’s castle in Limerick city which I read about on Shannonheritage.com.

I never really paid much attention to it when I passed by it but when I read about it on the website it seemed like a very interesting place to visit. Upon arrival at the castle I was impressed with the outer court yard just before I entered the castle visitor entrance, the court yard was cobbled stone with a medieval cannon standing on a stone platform and just to the left of the entrance was Limerick museum. The ticket cost for the visit was €6.45 for students which I thought was reasonable and I also receive brochure which showed a map and timeline of the castle. 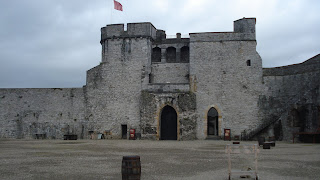 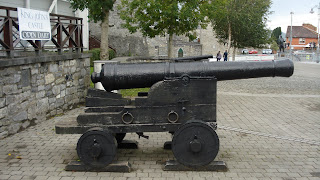 The first part of the tour was the introduction area which gave a synopsis of the last 100 years of the life of the castle and also a slide show that depict the preceding 700 years. There was also a very detailed scale model of the castle and wax models dressed in 12th century clothing.

The upstairs area that has a voice over commentary and illuminated displays tells how life was lived and battles conducted within the castle. There is also a small film theater where I was given a brief introduction to the williamite wars, the siege of Limerick was recreated graphically in a specially devised film.

The next area I visited was the castle courtyard which had a great view of the Shannon river and the east side of Limerick city. There was also a modern art piece on display. I wandered over to some steps leading underground which happened to be an archaeological site for visiters to explore. In here I saw the sites of 11th and 12th centuary dwellings, evidence of which were discovered during excavations in 1990/91. The site also includes the original end walls of the castle.

After the archaeological site I walked into the tower which had a display of King John sitting on a trone while a voice over of him arguing with one of his subjects was played. In the basement of the tower a replica was shown of how a 12th century mint may have looked, with a voice over describing the tools and methods that were used. I finished my visit with a visit to the gift shop where the ususal nick nags and tourist gifts were sold. All in all I found the visit to be an interesting and worth while experience.