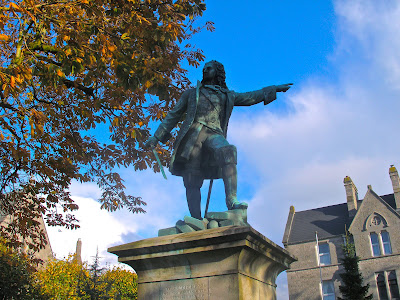 On the 18/10/2011 my friend and I visited the statue of General Patrick Sarsfield, a well-recognised Irish soldier, and the First earl of Lucan, who played a pivotal role in the defence of Limerick during the sieges of 1690 and 1691.
His statue is located in Cathedral Place, near St. John's Cathedral.
Although not from Limerick, Sarsfield is a local hero and the statue was erected in his honour. 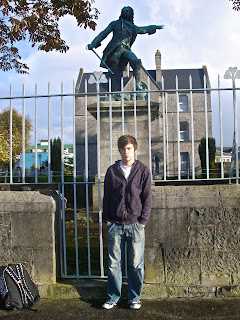 I have a great interest in history and because I recently moved to Limerick I briefly researched the city's history and stumbled upon the significance Sarsfield has towards the city. I then researched Sarsfield. This website provided me with his story.
The bronze statue was erected in 1881 and was designed by a Dublin man named John Lawlor following a sketch by local artist Henry O'Shea.
I located the statue by using Google Maps.

From the University we took a bus to William street in the city centre.
From the there we followed William Street and into Upper William Street and then turned left into Cathedral Place, and there he was standing on an inscribed block of concrete, behind a fence, overlooking the street, a few cars and pedestrians.
The block gives brief information about the man and his death from a a lethal wound in the battle of Landen, Belgium (formerly France) in 1693, aged only about 33.
The statue is very detailed and shows of the fashion of the 17th century very well.
From the knee high boots to the ringletted hair and all the other fashion features of Victorian times, it a very well made sculpture.
We took pictures of the statue, studied the inscription and then made our way back down William Street, spent a little more time in the city and then took a bus back to the university.
Visiting the statue was definitely worth the trip. 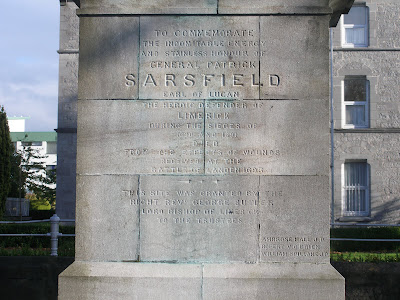