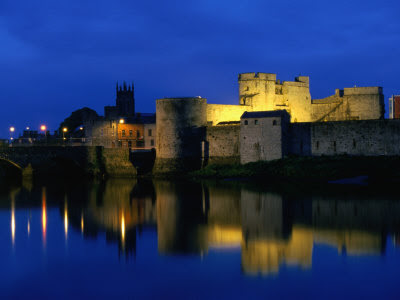 I am a fan of history and when I went about looking for something to do this project on straight away King Johns Castle in the heart of Limerick city seemed the most obvious subject as this is where Limerick more or less began.

I pass the castle twice a day going in and out to U.L. from my home in Ennis but have never taken the time to stop and think about what might have gone on there in times past. My imagination started running wild when I started my research and reading of the history of it.

King Johns Castle is situated at the core of the Medieval Limerick on the Southern band of the river Shannon just above the Curraghgower Falls. Its purpose in its prime was to defend the river boundary and bridge between the Gaelic kingdoms to the west and the Norman kingdoms to the east and south. It served as a watch out over cargos and sailors. It was also the administrative and military centre for the Norman Kingdom of Limerick.

at the centre of it. “The Siege Of Limerick” took place in 1691 with the defense centre being the castle. With the end of the siege of Limerick came the Limerick treaty, another important mark in Irish history. At the time of all of these historical events in 1691 Limerick was in fact Ireland's second largest city with a population of 4,000 people so the defense of the castle was seen as being crucial.

building of houses on its courtyard that were demolished again in 1989. Nowadays the castle is a very interesting and modern tourist attraction. They have historical exhibitions there telling the story of Limerick and the important role the castle played in all of it. To help make all of this realistic you can see sculptures, models, pictures, maps and even a multi vision show. The walls can be walked along and give great views of the city and countryside which I had not seen before when traveling in my car.

Today the castle still plays a very important role in the city of Limerick as it helps the economy in Limerick. A very different way to how it was helping Limerick 400 years ago. I am glad to have visited King Johns castle and found it very educational and opened my eyes up to a place I had previously taken for granted.

You can find out more on this subject from this page on Wikipedia.