For my assignment I chose to study Thomond Park rugby pitch. This famous ground is located in the centre of Limerick city and has been home to the munster rugby team for over sixty years. The venue is renowned worldwide for its unique atmosphere and passionate local supporters. It has played host to historic matches such as Munster vs New Zealand (1978, 2008), Ireland vs Barbarians (2010). Along with rugby matches it has also hosted the special olympics opening ceremony and concerts by Pink, Elton John, and Bob Dylan.

Trip to Thomond Park:
As an avid Munster rugby fan I have already visited Thomond Park on numerous occasions. My most enjoyable expierence of Thomond park was when i went to Munster vs All Blacks in 2008. 26,000 people filled the stadium in what was to be a memorable night for all involved. Munster produced a great performance but lost out in the end by 2 points. New Zealand wing Joe Rokocoko scored a try in the dying moments to clinch the game for the All Blacks. I was impressed by the sheer size of the stadium, which combined with the complicated-looking structural supports create a magnificent arena. The day before the match my father and I went on a tour of the stadium. We got to visit the museum where we watched a short film and looked at famous Munster memorabilia. Afterwards we visited the home and away dressing rooms, Munster dugouts and were treated to pitchside views of the playing pitch. 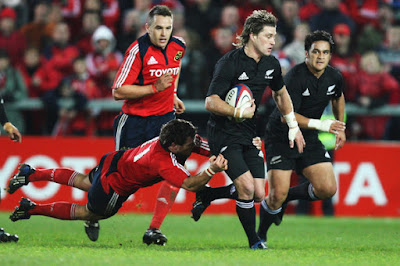 Each year thousands of people visit the historic ground for a variety of reasons. The majority choose to go to see the home of Munster rugby, however Thomond Park has also hosted a wide range of exibitions, seminars, gala dinners, fashion shows and even weddings! There is also a top class standard of catering provided by is on-site partners 'Masterchefs Munster'.
Links:
Pictures: http://www.bancrete.com/assets/images/projects/stadia/1tp.jpg http://4.bp.blogspot.com/-1w_dsJIOPJA/TmcDzBUwNEI/AAAAAAAAiJ4/Xvo5i970BiI/s640/Munster%252Bv%252BNew%252BZealand%252B2b84r9i9ksCl.jpg